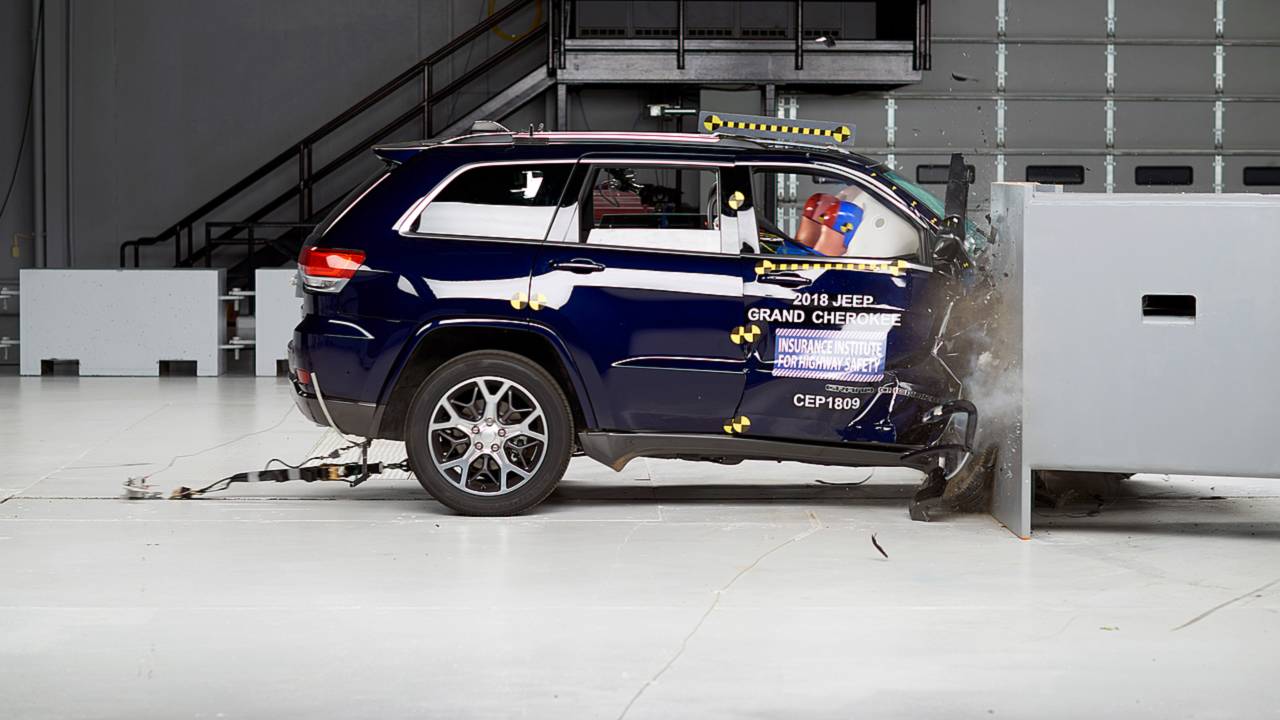 Crash tests have evolved dramatically over the years, with the Insurance Institute of Highway Safety implementing drive-side small overlap crashes in 2012. These tested what would happen if a vehicle started to veer into oncoming traffic and hit another vehicle. While automakers worked to reinforce projections for the driver’s side for the test, IIHS wanted to see how well passengers are protected, introducing passenger side small overlap crash testing last year. The recent batch of tests show some deficiencies with specific models – notably the 2018 Ford Explorer and 2018 Jeep Grand Cherokee, both of which earned a “Poor” IIHS rating for the passenger-side small overlap crash.

The Explorer earned its “Poor” rating because the crash compromised the vehicle’s structure, with serious amounts of intrusion into the cabin – 15 inches at the lower door hinge pillar and 13 inches at the upper hinge pillar and dashboard. Even the door sill pushed six inches toward the passenger dummy. Measurements from the dummy showed a high likelihood of right hip and lower left leg injuries occurring in a real-world crash. Ford says its new Explorer will have improved small overlap protection on both sides, according to IIHS.

Compare those structural intrusion numbers to the 2019 Kia Sorento, which not only earned a “Good” rating – the highest rating available – but was also awarded the Institute’s highest award, Top Safety Pick+. Maximum intrusion in the 2019 Sorento was just four inches on the right side of the toepan.

The 2018 Jeep Grand Cherokee earned its “Poor” rating with 10 inches of intrusion at the lower door hinge. While that’s alarming, what shocked IIHS more was the dummy’s head hitting the dashboard hard through the airbag. However, because the side curtain airbag didn’t deploy and the door opened, the dummy’s head moved outside the vehicle when it rebounded off the dash. Measurements from the dummy indicated right leg injuries and a head injury would be possible.

The 2018 GMC Acadia and Volkswagen Atlas also earned “Good” ratings. The Acadia had just two inches of intrusion on the right side of the toepan; however, the passenger dummy’s head slid off the right side of the front airbag, which left it vulnerable to contacting the vehicle’s hard structure. The 2018 Toyota Highlander, Nissan Pathfinder, and Honda Pilot all received “Acceptable” ratings.

ARLINGTON, Va. — Recent crash tests of midsize SUVs by the Insurance Institute for Highway Safety featured a range of problems, including structural collapse, an airbag nondeployment, hard hits to the dummy’s head and an open door. Still, 6 of the 8 vehicles managed to earn a good or acceptable rating for passenger-side small overlap front protection.

The midsize SUVs — all 2018 models except the 2019 Kia Sorento — are the latest to be put through the passenger side small overlap test. A small overlap crash occurs when just the front corner of the vehicle strikes another vehicle or an object such as a tree or utility pole. IIHS began rating vehicles in driver-side small overlap crashes in 2012. Since then, automakers have made great strides in protecting drivers in such crashes. However, passengers aren’t always afforded equal protection, which is why IIHS began rating vehicles in the passenger-side test last year.

“Although some vehicles in this group offer very good protection, in other models, the airbags, safety belts and structure showed serious deficiencies,” says IIHS Chief Research Officer David Zuby. “In those SUVs, a front-seat passenger would be at risk of injuries to the head, hip or leg in a right-side small overlap front crash.”

The Ford Explorer rates poor because its structure was seriously compromised. Intrusion reached 15 inches at the lower door hinge pillar and 13 inches at the upper door hinge pillar and the dashboard. The door sill was pushed in 6 inches toward the dummy. Measures taken from the dummy showed a high likelihood of injuries to the right hip in a real-world crash of the same severity, as well as a possibility of left lower leg injuries.

The Jeep Grand Cherokee had maximum intrusion of 10 inches at the lower door hinge pillar. More alarming was what happened to the passenger dummy’s head. It hit the dashboard hard through the front airbag and then, because the side curtain airbag didn’t deploy and the door opened, it moved outside the vehicle during rebound. Measures from the dummy indicated that right leg injuries would be likely in a crash of this severity, and a head injury would be possible.

The passenger dummy in the test of the Honda Pilot also indicated the possibility of head injuries. The head slid off the front airbag and moved far enough forward to hit the dashboard hard. However, with good structural performance, it still earns an overall rating of acceptable, as do the Toyota Highlander and the Nissan Pathfinder.

Three of the SUVs — the GMC Acadia, Kia Sorento and Volkswagen Atlas — earn a good rating. The Acadia had maximum intrusion of just 2 inches on the right side of the toepan. Its performance wasn’t flawless, however, as the passenger dummy’s head slid off the right side of the front airbag, leaving it vulnerable to contact with forward structure.

The Sorento was modified for the 2019 model year to improve protection in a passenger-side small overlap crash. The passenger-side toepan and door sill were reinforced. In the test, the structure was maintained well, with maximum intrusion of 4 inches on the right side of the toepan, and the dummy’s movement was well-controlled.

Of the newly rated SUVs, the Sorento is the only one to earn the Institute’s highest award, TOP SAFETY PICK+.