Yearning for a gasoline engine or a manual gearbox? Prepare to be disappointed.

[UPDATE] Skoda has dropped the first teaser image, mentioning the Kodiaq RS is currently at the Nurburgring undergoing testing.

Rather than bringing back the Fabia RS to make things right once again in the hot hatch world, Skoda has apparently given the green light to an RS-badged SUV. We won’t have to wait much longer to see it in the metal as the Kodiaq RS is reportedly expected to debut at the beginning of October during the Paris Motor Show. That probably means an official online reveal of the go-faster Kodiaq will take place at some point in September.

While the sole member of the RS family today – the Octavia RS – can be had with both gasoline and diesel engines, the Kodiaq RS will rely solely on a TDI despite the diesel debacle at the Volkswagen Group. Czech’s more practical VW Golf GTI can be had with a choice between a front-wheel- or all-wheel-drive layout, but the amped-up big bear from Mladá Boleslav is expected to feature an AWD-only arrangement. 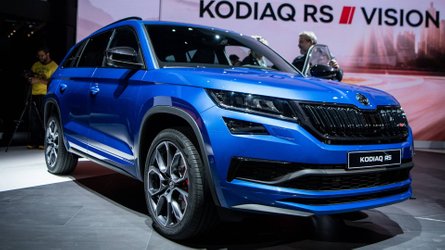 The four-cylinder, 2.0-liter TDI engine will be hooked up exclusively to a dual-clutch automatic transmission unlike in the Octavia RS where buyers can still go with a six-speed manual. It’s important to mention the diesel underneath the Kodiaq RS’ hood won’t be carried over from the performance liftback/wagon as it will pack an extra turbocharger.

The engine in question will be an adaptation of the Passat’s BiTDI in which it pumps out 237 horsepower at 4,000 rpm and a generous 369 pound-feet (500 Newton-meters) of torque from 1,750 rpm. As a side note, reports are suggesting the next iteration of the TDI-powered Octavia RS will be blessed with this torquey engine.

Beyond the Kodiaq RS – which could come in both five- and seven-seat flavors - a Superb RS is also rumored to be in the pipeline, but we’ll believe it when we’ll see it. The aforementioned Fabia RS might return for the supermini’s next generation as a powerful hybrid hot hatch as early as 2020.