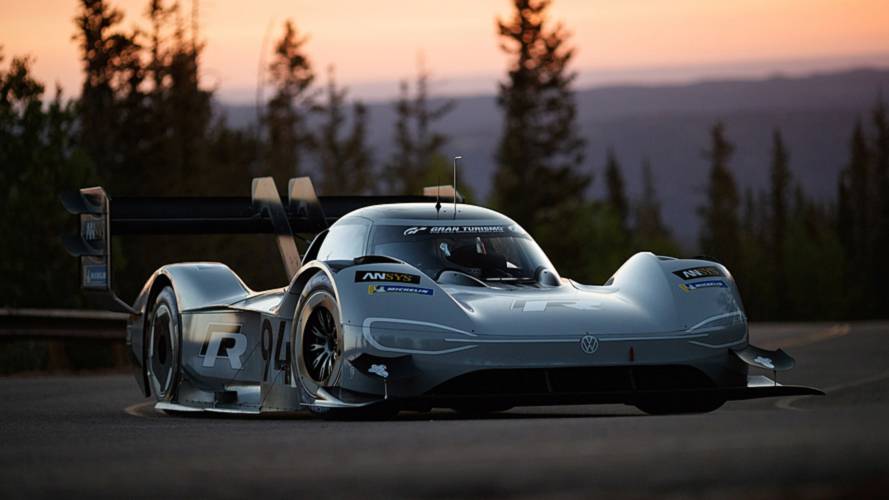 Can you guess why did the company go for 94?

Two weeks before the Pikes Peak International Hill Climb, Volkswagen has revealed its outfit for the 12.42-mile (19.99-kilometer) track 14,110 feet (4,300 meters) above sea level. The VW I.D. R Pikes Peak will come in grey and will carry the number “94” for a good reason.

Grey is the hallmark color of the brand’s I.D. family, which makes the inclusion of the fully-electric race car official. If you ask us, grey looks good for the I.D. R and kind of mysterious-looking for a car that’s essentially faster than a Formula 1 car.

See How VW Got The I.D. R Pikes Peak Up The Mountain In Record Time

What adds identity to the I.D. R is the number 94 that it would be wearing. It stands for I (9) and D (4). Yes, something so obvious was hiding in plain sight for a second. You’re not alone if you didn't realize that sooner, though.

“As is standard in American motor racing, the organizers allowed us to select our own start number. The 94 was our express wish, as it symbolizes the letters ‘I’ and ‘D’ – the ninth and fourth letters in the alphabet,” explains Volkswagen Motorsport Director Sven Smeets.

The I.D. R is still at doing final test runs and setup work. Dumas will return to Europe after the testing, wherein he’ll drive for Porsche at the 24 Hours of Le Mans on the weekend before the Pikes Peak. As soon as Le Mans is over, he’ll fly back to Colorado. We just hope his hectic schedule and time differences won’t take toll on him.

The countdown is on to the 96th Pikes Peak International Hill Climb. Two weeks ahead of the start of the most famous hill climb in the world, the I.D. R Pikes Peak appeared at the final official test in its final livery and bearing its start number. Volkswagen’s first fully-electric racing car lines up on 24 June in grey – the hallmark colour of the I.D. family.

Driver Romain Dumas will drive the number 94 car. “As is standard in American motor racing, the organisers allowed us to select our own start number,” explains Volkswagen Motorsport Director Sven Smeets. “The 94 was our express wish, as it symbolises the letters ‘I’ and ‘D’ – the ninth and fourth letters in the alphabet.” The I.D. R Pikes Peak, which features two electric engines and a system performance of 500 kW (680 PS), is the sporty figurehead of the future family of electric production cars, which Volkswagen will launch from 2020 onwards.

The technicians will focus on final set-up work during the official tests. Up until Sunday, Dumas will use every waking opportunity to bond with his car. The 40-year-old already knows the route like the back of his hand, having already taken outright victory at the Pikes Peak International Hill Climb on three occasions. The stated goal for this year is a new record in the class for electric cars. The current record of 8:57.118 minutes was set in 2016.

Once the testing is complete, Dumas will return to Europe again. The endurance specialist will drive for Porsche at the 24 Hours of Le Mans on the weekend before the Pikes Peak International Hill Climb. As soon as he crosses the finish line, the Frenchman will set off for Colorado. The first practice session of the race week at Pikes Peak takes place on the Tuesday (19 June). Qualifying for Dumas and the I.D. R Pikes Peak is scheduled for the Wednesday. The starting order for the race on 24 June will be announced on the Friday at 17:00 (01:00 on Saturday, CEST). The first competitors will get underway at 08:00 (16:00 CEST), with the motorcycles traditionally kicking off proceedings.