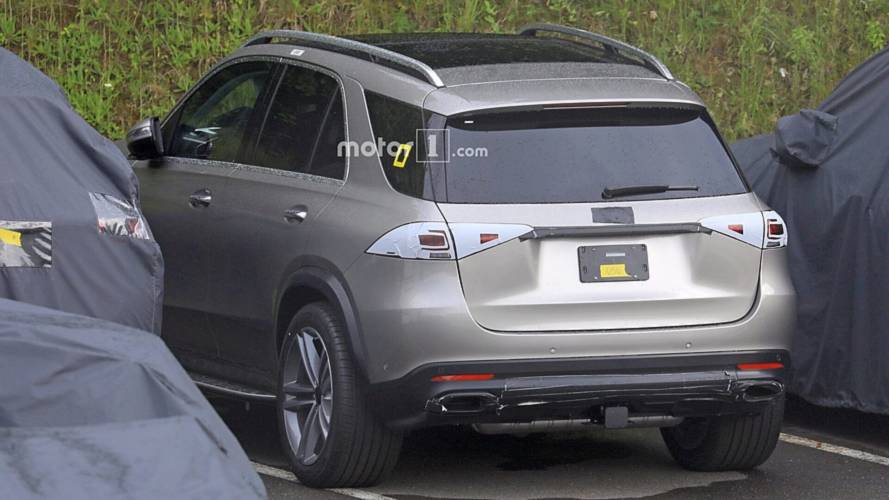 The new BMW X5 better watch out as Mercedes is almost ready to unveil the revamped GLE.

It was only on Friday when the 2019 Mercedes GLE emerged on YouTube as an almost undisguised production-ready prototype and now our own spies have managed to catch on camera the next-generation midsize luxury SUV. As a matter of fact, it’s the exact same vehicle, carrying a yellow sticker with “656” on the license plate frame.

From what we are able to see in the adjacent spy shots, it only has a thin white foil on the taillights, which by the way have nothing in common with those of the outgoing GLE. The rear lighting clusters are much narrower and have a sleeker shape lending the BMW X5 rival a fresher look as it would be appropriate for a next-gen model.

Perhaps the most interesting styling cue of the GLE and the ML before it would have to be the distinctive C-pillar, and here we can clearly see Mercedes hasn’t messed around with the recipe as the 2019 model will still have it, but with a twist. Look closer and you’ll immediately notice an indentation in the pillar acting as an extension of the quarter glass’ outline. It goes up to meet the thick chrome framing of the rear doors and will make the next-gen model easily identifiable compared to its predecessor when looking at the side profile.

While we don’t get to see the front fascia of this almost camo-free prototype, another test vehicle has been spotted by our spies. Unfortunately, it had a similar thin white foil all over the hood and on parts of the bumper. It also covered a good chunk of the headlights, but even so, the styling isn’t hiding any big secrets as the disguise is still quite revealing.

Overall, the 2019 GLE’s exterior design is not exactly a major departure when put side by side to the current model, but it has enough changes to make it worthy of a next-gen vehicle. It looks fresh, modern, and more than just a simple case of being an upsized GLC.

We’ll have to wait a little bit more to check out the interior, although the spy shots we have so far have allowed us to get an accurate idea of how Mercedes has transformed the posh cabin of its GLE.

The three-pointed star hasn’t said when it will host the official reveal, but chances are we won’t have to wait much longer.