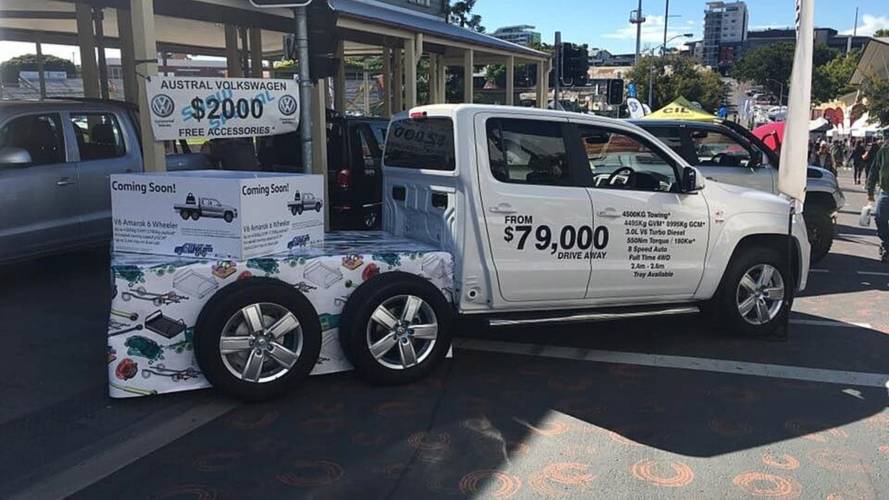 Not only will it (probably) look cool, but it will be able to carry more cargo and is going to have a lower bed for ease of access.

The Amarok is one of the most competent pickup trucks out there, but for those in need of a workhorse able to carry more, a beefier version is on its way. Teased this week by Austral Volkswagen at the Queensland Caravan Supershow, the six-wheeled Amarok is currently being developed by multi-axle specialists Six Wheel Conversions with VW’s blessing.

The company is specialized in six-wheel conversions and they’ve made more than 1,200 so far of models such as the Nissan Navara and Ford Ranger as well as Isuzus. That “blessing” we’ve mentioned will come in the form of VW’s seal of approval by selling the six-wheeled Amarok through the company’s dealership network and providing it with some warranty coverage.

It will be offered exclusively in the more practical double cab guise because that’s the only body style available from VW Australia. That being said, Six Wheel Conversions does not exclude the possibility of converting existing single cab Amaroks further down the line.

More about the Amarok:

Even more good news, the Amarok’s 1.55-meter bed will be replaced by a 2.4- or even a 2.6-meter bed allowing owners to carry longer items. It’s going to be easier to load and unload cargo as Six Wheel Conversions mentions the tray floor height will be roughly 30 cm (11.8 inches) lower.

Since this is being developed in Australia for Australia, it seems unlikely we will see the six-wheeled Amarok anywhere else for the time being. We can only hope the beefier pickup truck will give other companies specialized in six-wheel conversions from different parts of the world where the Amarok is available an idea to roll out a similar product.