Peugeot 508 SW Debuts In All Its Wagon Glory 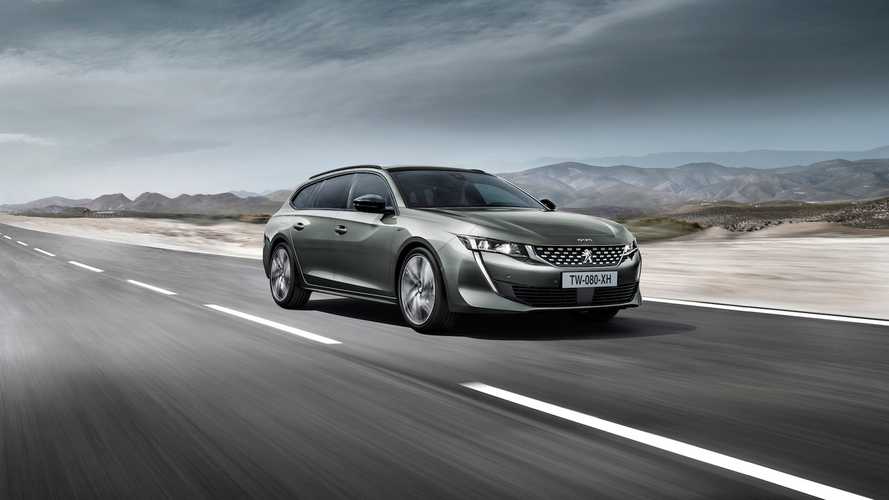 The French carmaker takes its chic sedan and turns it into an elegant wagon.

Earlier this year, French automaker Peugeot debuted a new and quite chic 508 sedan. The 508, both inside and out, is stunning, with a crisp exterior design and upscale interior. Peugeot, being the European company that it is, is adding a new body style to the 508 lineup – a station wagon. The 508 SW takes the elegant sedan and adds an elongated roof and hatch at the rear, increasing interior capacity and versatility while wrapping it an even more attractive package.

The pronounced nose carries over from the sedan to the SW with plenty of sharp design lines up front. The scallop down the side of the 508 SW creates a graceful crease down length of the way, just below the greenhouse, that flows into the rear taillight housing, which is of the same design found on the sedan. One added touch to the rear is the PEUGEOT lettering centered on the hatch just below the glass.

Inside, the 508 SW receives Peugeot’s i-Cockpit that has proliferated across the company’s range of products. That means the 508 SW gets the same small steering wheel and high-mounted 12.3-inch instrument panel from the sedan. There’s a 10-inch centrally mounted touchscreen that offers access to Apple CarPlay, Android Auto, Peugeot Mirrorlink, and 3D navigation.

Power will come from the same engines that motivate the 508 sedan. There will be a 1.6-liter gasoline engine producing either 177 horsepower (132 kilowatts) or 222 hp (165 kW). An eight-speed automatic is the only available transmission with the 1.6-liter mill. Customers will also have the option of choosing from one of three diesel engines ranging in size from 1.5 to 2.0 liters. Power output is 128 hp (95 kW), 158 hp (118 kW), and 177 hp (132 kW). A six-speed manual is only available with the 128-hp engine. Otherwise, the only gearbox is the eight-speed automatic. In the second half of 2019, there will be a gasoline plug-in hybrid version of the 508 SW made available.

The Peugeot 508 SW is forbidden fruit in North America. It’s a station wagon, and wagons – even hatches – suffer selling when there is a plethora of crossovers and SUVs that are demanding customer dollars. However, the 508 SW is elegant, packed with technology, and offers a luxurious interior. The 508 SW will debut later this year at the Paris Motor Show before going on sale in Europe in January 2019.

A few months after the radical sedan, PEUGEOT unveils the SW version of the new PEUGEOT 508. Deep mutation. The new PEUGEOT 508 SW upsets the codes of the disputed market breaks of the D segment and draws inspiration from the world of shooting brakes. With its silhouette Low and dynamic, the new PEUGEOT 508 SW adopts a striking design. She succeeds the combination of athletic elegance and practicality in terms of habitability, volume and access to the safe. Equipped with the latest generation of PEUGEOT i-Cockpit® and a radius of contained turn, it plays on the terrain: from ultra-urban to large spaces motorway. Anchored in the brand's DNA, the excellence of the ground connections of the new PEUGEOT 508 SW combines a remarkable touch of road with a perfect mastery of cash movements. Its design centered on efficiency, safety and top comfort range is the promise of intense sensations.

The new PEUGEOT 508 SW will be presented at the Mondial de Paris 2018 and marketed in Europe from January 2019.

A segment still dominated by breaks

The D segment represents a market of 1,400,000 vehicles in Europe. The proportion of breaks remains majority of the past decade, despite the increasing number of offers and silhouettes, and including SUVs. In Europe, one in three vehicles sold in the D segment is a station wagon.

The offer on the segment is divided between a traditional offer of large volume breaks, most of offered by the general manufacturers, and a premium offer that combines the practicality of a break to a much more dynamic design.

The choice of PEUGEOT is clear, whole. Create an object of desire, break the traditional codes for invest an athletic and modern morphology hitherto reserved to some top builders range.

Like the PEUGEOT 504, born fifty years ago, the brand has always drawn breaks made from silhouettes sedans. This is how the new PEUGEOT 508 SW benefits from all the stylistic attributes of the sedan's radical design. It adopts a very dynamic morphology thanks to its new proportions.

Thanks to the presence of functional roof bars that are well integrated in style, the car remains almost as low as the sedan – barely 1.42 m. It's almost 6 cm shorter than the generation previous, a guarantee of optimized aerodynamics while preserving a head guard in places back to segment.

Long 4.78 m (+3 cm only vs the sedan and -5 cm vs the previous generation), the profile of the new PEUGEOT 508 SW reveals taut and fluid lines, surmounted by a flag line low and stretched.

Unique for a break from a generalist manufacturer, frameless doors allow both to refine and energize the silhouette, but also to contain the glass surfaces. Games and outcrops are reduced to the best know-how, the pneumatic mounts are adapted to fill the wheel wells perfectly, the roof antenna is removed (now screen printing). His silhouette is both muscular and inspires the high end.

Identical to that of the sedan, the front panel is still impressive. With the Full LED floodlights and the vertical visual signature of the opalescent LED daytime running lights, the new PEUGEOT 508 SW has a strong and exclusive identity, underlined by the lion in the center of the grille and the "508" logo on the hood nose.

The rear view suggests power and modernity with the shiny black horizontal strip framed by three-dimensional Full LED taillights from the sedan. Lit by day and night with an adaptive intensity, these fires give a permanent and evolutive reading of the colored claws from the profile to the full back. As for the double chrome exhaust cannulas, they sit the car and gives it an added sense of dynamism.

Access to the trunk is via a convenient tailgate (can be motorized and hands-free), favoring accessibility. The boot sill is both low and wide (6 cm lower than the sedan at only 63.5 cm from the ground and 2.4 cm wider). The retractable quick-release fabric allows immediate visibility of the entire trunk. With a subtension capacity of 530 liters, this The last one reveals simple shapes and is totally exploitable. This volume is very close to Underbody volume of the trunk of the replaced version (560 liters).

Beyond real convenience, the boot entrance has a neat finish with a stainless steel threshold facilitating the loading of luggage. Aluminum floor rails are present in GT finish and a load stop net makes it possible to effectively compartmentalize the trunk. Modularity is one of the fundamentals of a break, that of the new PEUGEOT 508 SW reveals a 2/3 - 1/3 rear seat with Magic Flat function. This system allows a drawdown both sides of the bench by the action of two controls accessible on the sides of the chest. The result is an almost flat floor, giving off a total volume of loading of 1780 liters.

A magnified and incomparable interior with the PEUGEOT i-Cockpit®

Like the new Peugeot 508 sedan, the SW version gets the latest interpretation of the PEUGEOT i-Cockpit®.

The attention to detail, the finesse of assembly games and the choice of materials immediately position the driving position of the new PEUGEOT 508 SW in a highly technological, desirable and elegant world.

This is made possible thanks to:

The arrangement and the volume of the storage units were the object of a very particular care. So, he is possible to deposit two bottles of 1.5L in the ventilated glove box, one of 1L in each tray of door and two of 0.5L in the central storage under the armrest (besides the cupholders). With the help of a judicious cable gland, the large drop zone near the EAT8 lever can easily accommodate the biggest smartphones (if they are not in induction charging in the housing under the console).

Front passengers will be able to settle in ergonomic, wraparound seats (labeled AGR) and can benefit from five multipoint massage programs. The range offers a extensive range of rich and rewarding garnishes, such as Alcantara® or Nappa Full Leather flower. The latter is available in two colors: black or purple red (called Sellier).

At the rear, passengers benefit from a seat whose backrest is tilted at 27 ° for more comfort. The roof guard is increased by 4 cm compared to the sedan and occupants can enjoy a panoramic sunroof at great clear bay. Thanks to the frameless rear doors and their cutting boarding the quarter window, the accessibility to the bench is wide and easy.

Like all the interior lights, the individual reading lights integrated in the roof are LED and touch.

The high-end HiFi system is developed by FOCAL®, the great acoustic signature French. With 10 speakers equipped with exclusive FOCAL® technologies, this system offers a its pure, chiseled and perfectly distributed in the vehicle. Tweeters are lined with metal grills brushed on the 4 doors.

The interior of the new PEUGEOT 508 SW thus confirms the impression of quality and requirement that the car shows on the outside. This excellence is also reflected in the profusion of related equipment comfort or security.

The new PEUGEOT 508 SW offers an arsenal of latest-generation driving aids in particular meeting the latest EuroNCAP requirements. What's new compared to the rest of the PEUGEOT range are:

In addition to these new features, the new PEUGEOT 508 SW is equipped with many other systems driving aids:

Aboard the new PEUGEOT 508 SW, connectivity is ubiquitous with the equipment following:

A unique and instinctive driving experience

At PEUGEOT, driving sensations are an integral part of the brand's DNA. True technological flagship, the new PEUGEOT 508 SW is endowed with the best know-how of PSA Group engineers:

Whether on the architecture of the car, the work of the volumes, the optimization of the dimensions, the mass reduction, aerodynamics or powertrains, everything has been implemented to ensure intense driving pleasure and achieve excellent CO2 emission values.

The new PEUGEOT 508 SW benefits from the new generation of PureTech engines and BlueHDi (with generalized SCR technology) presented on the sedan.

In essence, two versions with the PureTech engine of 1.6L of cubic capacity:

In Diesel, four versions BlueHDi in 1.5L and 2.0L of cubic capacity:

All these engines are already homologated according to the "Euro6.d temp" standard. anticipates the requirements of the Euro6.d standard applicable from January 2020, in particular those concerning emissions of nitrogen oxides. The CO2 emission values are Best in Class and take into account the new technical provisions of the WLTP procedure, which consists of reconcile approved consumption and consumption in customer use.

On the PureTech family in ECO mode, the EAT8 automatic gearbox automatically in Neutral mode (freewheeling). This function is available from 25 to 130 km / h, when conditions permit. Its triggering is allowed when no support on the pedals is not detected. This totally transparent device for the driver reduces the internal friction of the box and reduce the vehicle consumption by about 3%.

performance with an extended ZEV 50 km (in WLTP cycle) while preserving the capacity of the trunk with a battery location under the rank 2 seat.

Like the sedan, the new PEUGEOT 508 SW will be produced at the Mulhouse plant and will benefit for its launch of the label "Origine France Garantie".

Presented in 1st world at the next Paris Motor Show, the new PEUGEOT 508 SW will start marketing in January 2019 for Europe and in the current 1st semester for the international.