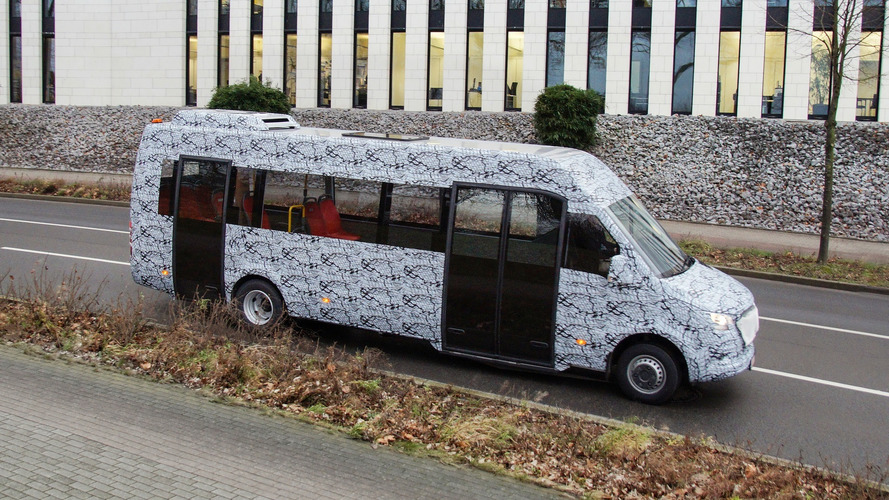 The current generation Mercedes-Benz Sprinter-based minibus was launched in 2007 and updated approximately six years later, and is now about to be replaced by a brand new model. The German company has released two images with the new minibus being put to its paces close to the Minibus headquarters in Dortmund, Germany.

As always, the latest generation Sprinter bus will provide the foundation for the new minibus. Mercedes promises the latter is already in the final stages of development, so it should be revealed very soon. The new series of minibuses will adopt the design features of the new Sprinter, as well as its new safety and assistance systems and “the many other advantages of the” model.

The minibus division of the manufacturer also promises the new model will benefit from the variation options of the new Sprinter, which basically means customers will be able to order the new minibus in a number of lengths and cabin configurations. Given the fact that the design of the new Sprinter is not a major departure over the previous model, we expect the new minibus to look familiar, too. The visual changes will include a larger grille and narrower headlights.

Do you know the current Mercedes minibus?:

On board should be the latest generation MBUX infotainment system, which is already available for the new Sprinter and comes with a touchscreen replacing the older rotary knobs/touchpads on the previous generations of the system. It will provide an easy access to infotainment functions, as well as a parking camera and a full 360-degree view system.

The new Sprinter is about five percent more fuel efficient than its predecessor, so similar numbers could be expected for the new minibus. Power should come from either a 2.1-liter inline-four turbodiesel or a V6 diesel mate to a seven-speed automatic.

Outside Van Next Van Motorhome

Dortmund - The new minibuses from Mercedes‑Benz are being put through their paces. One bus was spotted in Dortmund, the location of Minibus GmbH. This is where a new minibus is clocking up its first miles as part of some road trials.

A new Mercedes‑Benz Sprinter always provides the basis for a new generation of star-branded minibuses. The bestseller in its class among vans ultimately forms an excellent platform for add-on bodies and equipment. The next Sprinter is already available to order, and so one might say that the minibus developers are working hard on new models.

No doubt the minibuses will also benefit from the new design, the host of cockpit variants, the new safety and assistance systems and the many other advantages of the Sprinter.

The doors suggest that the depicted minibus comes from the Sprinter City model series for regular service applications. Clearly it is a larger variant – perhaps a successor to the previous three-axle Sprinter 77? But we should not be waiting too long for the solution to this puzzle.