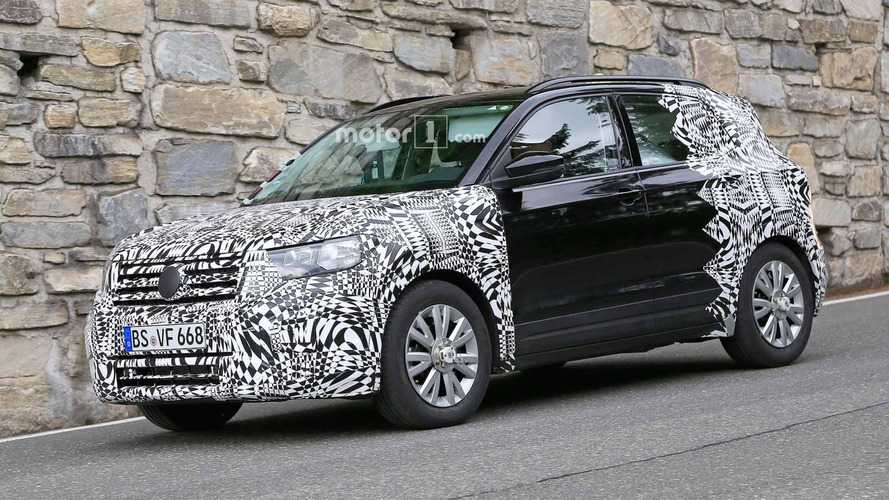 The chunky styling makes the model look like a smaller version of the T-Roc.

Volkswagen intends to introduce the compact T-Cross SUV as a smaller crossover in its lineup later this year, and these spy photos catch a camouflaged test mule that looks nearly production ready. The little crossover's styling takes strong cues from the somewhat larger T-Roc.

Like the T-Cross Breeze convertible concept (below), the production model features a wide grille that incorporates into angular headlights. Look very closely at the front end to see the square intakes in the lower fascia, too. In profile, the vehicle features a boxy, chiseled appearance with a thick C-pillar at the rear that draws the eye back there. Overall, the vehicle is rather conservative, but when the model arrives in showrooms, expect to be able get the T-Cross with a stylish two-tone body featuring a contrasting roof.

The T-Cross will ride on the smaller version of the MQB A0 platform from models like the VW Polo, which will give it a wheelbase around 1.18 inches (30 millimeters) shorter than a T-Roc. The powertrain range will also likely come from the Polo. The base version will likely use a turbocharged three-cylinder and front-wheel drive, but the range-topping trims will at least have all-wheel drive as an option – if not a standard feature.

Shortly after its debut, the T-Cross will go on sale in Europe. It'll likely arrive in the United States sometime in 2019. During the Chicago Auto Show, Hinrich Woebcken, CEO of Volkswagen North American Region confirmed plans to "bring another B SUV, another A SUV, besides the Atlas and the Tiguan," and he said both would ride on the MQB platform, which hinted both the T-Roc and T-Cross had a possible future in America.