Camera Car Ends Up With Smashed Windows After Mustang Does Donut

Rocks can do some severe damage to a car.

If there’s a video camera and a Ford Mustang around, something dumb is likely to happen. Now, that’s not to say all Mustang drivers are terrible – or have an unquenchable thirst for crowds. Every day thousands of Mustangs drive – gasp – on public roads with other cars, motorcycles, pedestrians, and bicycles, and not one becomes an internet meme. Often, the stuff of internet virality comes in crowded situations where showboating is encouraged – and the driver lacks the skill to control the Mustang. 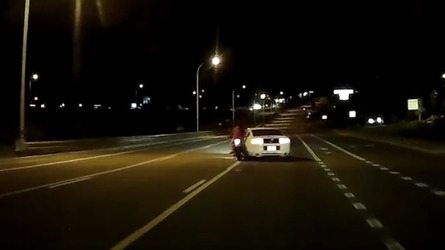 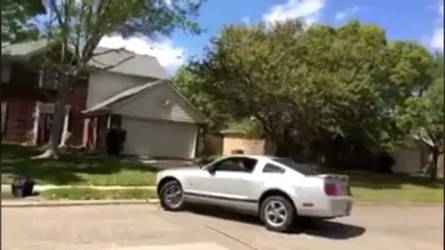 The video we have here, from the ViralHog YouTube channel, isn’t Mustang exclusive. Any rear-wheel-drive car could cause the same amount of destruction. However, this being the internet, and the car in the video being a Mustang, it’s almost law to share this video. The video is quick – a brisk 12 seconds – but the destruction caused will take hours to repair. A red Mustang GT, with its 5.0-liter V8 engine, spins around the back of the pickup truck and slides into performing a donut on the passenger’s side before the Mustang driver straightens the car and speeds away causing rocks to shoot from the rear tires toward the truck.

You can hear rocks and other bits of dusty debris pelting the side of the pickup. Even the passenger turns away from the side window trying to shield his head. The front passenger side window cracks while the rear passenger window shows a gaping hole in it. The side of the truck is probably littered with dents of various sizes from the rocks. The Mustang driver seems oblivious to the damage he caused.

The problem with the Ford Mustang becoming a viral internet meme isn’t the fault of the Mustang itself. There are other powerful, V8-powered, rear-wheel-drive coupes that seem vegan by comparison. The issue lies with how cheap and accessible the Mustang is to people. A quick internet search finds several 2011 Ford Mustang GTs for sale with less than 100,000 miles and under $15,000. That’s a very manageable price for a lot of people who may have never had a 400-plus horsepower V8-powered car before. Add the two together, and, well, you get this.