It's safe to say the C Class competitor won't be going through any major styling tweaks...

Mercedes recently refreshed the C-Class while BMW is putting the finishing touches on the next-generation 3 Series likely slated to debut this fall. The folks over at Audi are not wasting any time either as the A4 is getting ready to go through the typical mid-cycle refresh even though the current model was unveiled only three years ago. Just last week our spies caught on camera a lightly camouflaged prototype of the wagon and now we’re able to share fresh images of the sedan in the fancier S Line spec.

There are quite a few similarities between the two vehicles, such as an identical new bumper incorporating honeycomb plastic trim pieces at the front where the sedan has the exact same swirly disguise with a black and white pattern. Moving at the back, we notice the new trapezoidal exhaust tips flanking a piece of plastic trim trying hard to look like a diffuser. 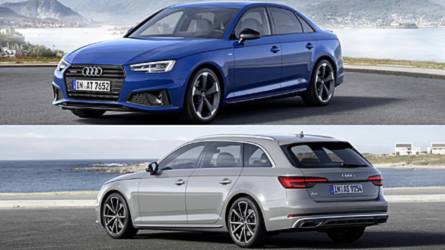 While clear photos of the interior are not available yet, it’s easy to notice the refreshed A4 Sedan will continue to have a tablet-styled display for the MMI infotainment system positioned on top of the dashboard. The more luxurious A6 and A8 have both received a more high-tech cabin with the touchscreen neatly integrated in the center console. These bigger sedans have also eliminated the physical buttons of the climate controls to make room for a third fully digital screen – a setup also set to be implemented in the upcoming Q8.

It would probably be too expensive to overhaul the A4’s dashboard, hence why the facelift will likely only focus on bringing some software revisions to the MMI setup and maybe to the Audi Virtual Cockpit as well. A broader array of safety and assistance tech is likely on the agenda as well to match what the other two German rivals are offering.

Since we are only at the second batch of spy shots, it likely means an official reveal of the mildly updated A4 won’t occur in the near future. We expect more evolved prototypes to feature revised headlights and taillights, but nothing to write home about. Chances are a world debut will take place in 2019, unless Audi is in a hurry to have the facelift ready for the Paris Motor Show in October or for Los Angeles a couple of months later.