2020 Ford Mustang Shelby GT500 Teased From Above In New Rendering 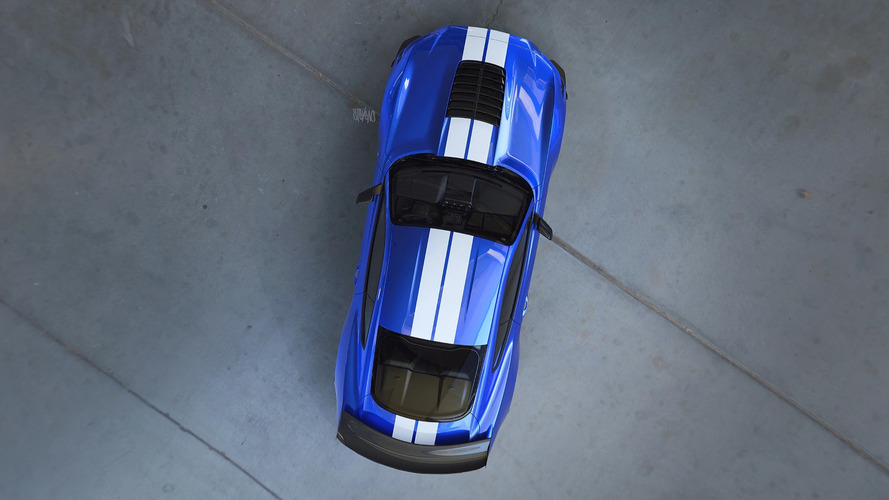 The wait is nearly over. In just a few weeks it seems, we’ll get our first full look at Ford’s most-powerful Mustang to date: the Shelby GT500. Spy photos have hinted at the muscle car’s upcoming arrival, but now we have our first look at the potent pony car almost in its entirety.

A new rendering shows the 2020 Ford Mustang Shelby GT500 overhead. Like nearly all iterations before it, this particular example is wearing a signature Shelby blue paint job with dual white racing stripes. But this new model appears to be a bit more extreme than its predecessors.

For one, there’s a huge functioning vent on the hood – ideally to relieve the Mustang from its rumored 700-horsepower output. We can also see a set of blistered fenders, some unique louvers on the front fascia, and one daunting rear wing. Already we know that the Shelby will adopt an even more imposing grille, too, and a large front splitter.

It’s still unclear exactly which engine will be found underhood, but rumor has it that a supercharged 5.2-liter V8 – codenamed Predator – could be the unit of choice, producing the aforementioned 700+ hp. Unlike the GT350, the GT500 will use a traditional 90-degree crankshaft. There should also be a choice of both a dual-clutch and manual transmission options. The former may have been captured in an early spy video.

With all that potent power in mind, don’t expect Ford’s new GT500 to come cheap. The pony car will compete directly with cars like the Chevrolet Camaro ZL1, and the Dodge Challenger SRT Hellcat. Both of those vehicles have an asking price well north of $60,000.