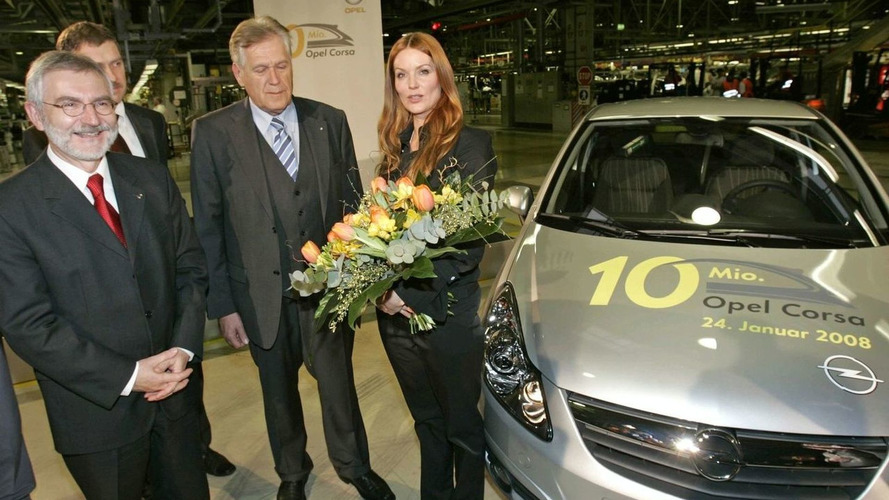 Today Opel announced that its Corsa hatchback, which has been in production since 1982, has reached a production milestone of 10,000,000 units!

Today Opel announced that its Corsa hatchback, which has been in production since 1982, has reached a production milestone of 10,000,000 units! To commemorate the occasion at Opel's plant in Eisenach, Thuringen, Germany, state premier Dieter Althaus and German Economics minister Michael Glos attended the event, in which German actress Esther Schweins drove the ten-millionth anniversary ecoFLEX 1.3 CDTI off the production line.

Production began initially in Zaragoza, Spain in 1982 and after quickly reaching a ten percent market share in Europe, the first-generation Corsa (also known as Corsa A) racked up sales of over a million units by 1986. Following sales of 3.1 million units by 1992, the Corsa A is replaced by .... surprise surprise the Corsa B. During the 1990s Opel rapidly expanded production of the Corsa in Europe (Azambuja, Portugal and Eisenach, Germany), while initiating the production of the essentially identical, vaguely Americanized Chevrolet Corsa in Brazil, Mexico and Argentina. Since the launch of the fourth-generation Corsa D at the British International Motor Show in 2006, over 550,000 units have been sold.

Ever since the European Union announced its carbon dioxide target rate of 120 g/km, car manufacturers have been keen on undercutting that rate by the smallest possible margin and adding an ECO-label in the model name, which is exactly what Opel's done. The ecoFLEX is supposed to emit a meager 119g of CO2 and there's no reference to its horse power rating. I, for one, think that the milestone car should have been the Corsa OPC. What do you think?