Porsche 956 C, 919 Hybrid Evo Driven Together At The Nurburgring 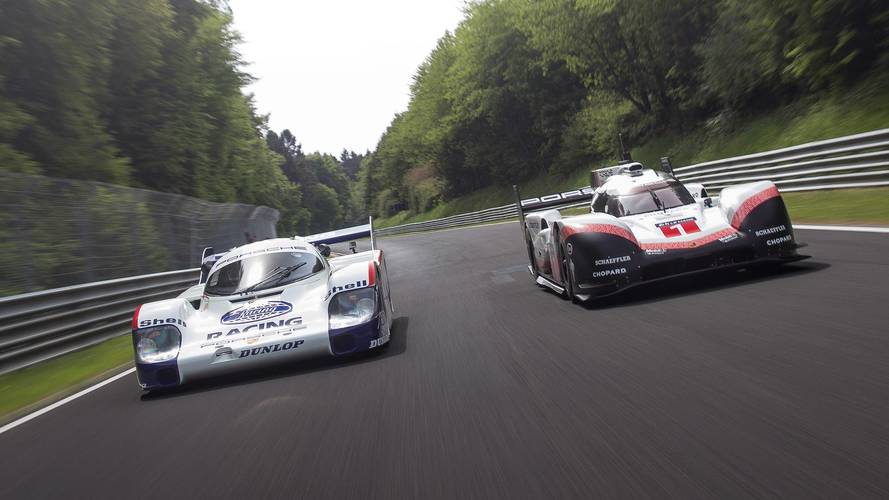 Porsche isn’t yet ready to break its own record at the ‘Ring.

After smashing Lewis Hamilton’s lap time at The Spa with Neel Jani behind the wheel, the 919 Hybrid Evo continues on with its retirement tour. There were many speculations roaming around after that historic run, saying that the 919 Evo is bound to take the current Nürburgring Nordschleife record from another Porsche that holds the best lap time since 1983. The other Porsche we’re talking about is the 956 C, a race car that completed the 12.93-mile (20.832-kilometers) 'Ring in just 6:11.13.

See More Of The 919 At The Nürburgring:

Well, the carmaker from Stuttgart knows how to excite its fans. Instead of breaking its own lap record, it sponsored a demo run in front of 200,000 attendees instead, with both the legendary racing cars running side-by-side with each other at the ‘Ring. Timo Bernhard was the man behind the 919 Evo’s wheel, while Hans-Joachim Stuck pilots the record-holding 956 C. Both were ecstatic with this opportunity, with Stuck describing the experience as an early Christmas gift. He also describes the 956 C as a race car that "still runs like a clockwork.”

It was a fantastic show run, as it ushers in the start of the 24-Hours Nürburgring race next month. The 919 Hybrid Evo may not even tried to break the 956 C’s record at The Green Hell, but the side-by-side run is more historic and more fitting for the 919 Tribute Tour, if you ask us. Besides, breaking its own record may not make any sense anyway.

Watch the historic run at the video below:

After the Nürburgring run, the 919 Tribute Tour will continue with its journey around the world before the 919 Evo completes its retirement. The 25 Hours VW Fun Cup in Spa will be its next destination on July 6-8, and will continue to the Goodwood Festival of Speed on July 12-15. The tour will also make its appearance at the Festival of Porsche in Brands Hatch on September 2 and at the Porsche Rennsport Reunion in Laguna Seca, California on September 26-29.

Gallery: Porsche 919 Hybrid Evo And 956 C At The Nurburgring

919 Tribute Tour with strong partners at the Nordschleife

Stuttgart. Today’s joint show of the Porsche 919 Hybrid Evo alongside the 956 C on the German Nürburgring Nordschleife was the second stop of the ‘919 Tribute Tour’. Whereas at Spa-Francorchamps (BE) Neel Jani (CH) on April 9 beat the former Formula One lap record time, on this occasion Timo Bernhard (DE) and Hans-Joachim Stuck (DE) took it rather easy in the Eifel mountains.

Timo Bernhard: “This lap just before the start of the 24-hour race was a special experience for me. It was an honour to go side by side with Hans around the Nordschleife with him driving the 956 C and me at the wheel of our 919 Evo. The fans really enjoyed seeing these two legendary racing cars. I could almost feel their excitement in the cockpit. This was a very nice gift for me.”

Hans-Joachim Stuck: “Christmas came kind of early today. It was fun for the fans and fun for us. The barbecues are lit and smoking, it is absolutely unique what the fans set up around the track here. Of course you can have a close look at that when you go so slow as us today. But I have to admit the right foot was really itching. The 956 stills runs like a clockwork.”

Fritz Enzinger, Vice President LMP1, comments on the appearance in front of 200,000 thousand people: “The get-together of those two extremely successful racing cars produced remarkable pictures.” Enzinger explains: The initial idea of a farewell tour with the Porsche 919 Hybrid came up last summer, soon after the decision was made to pull out of the FIA World Endurance Championship. First we spoke about exhibitions and demo runs. But then inside the team the idea evolved to combine the tour with a try of a lap record to show the car’s true potential. This is how we began to unchain the 919 from a few restrictions that came from the regulations. Of course we needed financial backing for the ‘919 Tribute Tour’ and the Evo development. Without our partners, we wouldn’t have managed this. Therefore, and also on behalf of the fans, I really want to thank them very much.”

Chopard with its international reputation for watches and jewellery was the Porsche LMP programme’s official timing partner right from the beginning. The Geneva based company, founded in 1860 and today employing more than 2,000 people worldwide, keeps accompanying the 919 on its ‘Tribute Tour’.

Vodafone Global Enterprise, dedicated to delivering communication services to the world’s largest multinational, is on board too. The official communication partner’s global network spans 150 countries. Over 3,000 employers support more than 1,700 corporations.

Schaeffler, global supplier to the industrial and automotive sectors, is the team’s official technology partner. Schaeffler develops and manufactures precision products for everything that moves – in machines, equipment and vehicles. The range comprises components and systems for engines, transmissions and chassis, for optimizing drivetrains based on internal combustion engines, hybrid vehicles and technologies for electric mobility.

Michelin and Porsche have enjoyed a successful partnership in motorsport and with production vehicles for decades. Since 1961, the French premium tyre brand and the German sports car manufacturer have been working closely together. For the 919 Evo, a racing car that produces more downforce than a Formula One car, Michelin developed new tyre compounds.

Mobil 1 is the world’s leading synthetic motor oil brand. Porsche and ExxonMobil sucessfully work together for more than two decades. As technology partner and exclusive lubricants supplier, ExxonMobil together with Porsche develops cutting edge innovations that deliver impressive performance both on and off the race track. The Esso brand, the US company’s fuel division, also lent its additional support for the ‘919 Tribute Tour’.

The well deserved beer after a successful event is always a Veltins – the premium brand of the German C. & A. VELTINS brewery, founded in 1824. The company joins the farewell tour as official partner.

Also the German lighting manufacturer TRILUX from Arnsberg stays with the LMP programme for the farewell tour as official lighting partner.

All together these partners make it happen that the ‘919 Tribute Tour’ continues. After the lap record in Spa and the show run at the Nordschleife on May 12, the next stops are the 25 Hours VW Fun Cup in Spa (July 6-8), the Goodwood Festival of Speed (July 12-15), the Festival of Porsche in Brands Hatch (September 2) and the Porsche Rennsport Reunion in Laguna Seca, California, from September 26-29.