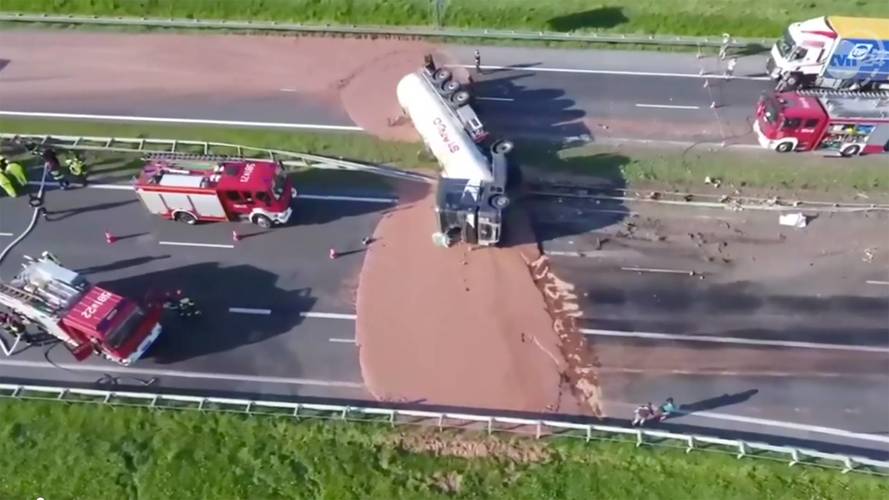 “Chocolate Rain, Zoom the camera out and see the lie,” or so goes the line from Tay Zonday’s 2007 viral YouTube hit “Chocolate Rain.” But when you zoom the camera out from an accident on a Polish highway, all you see is a tragedy. A semi-truck traveling between Warsaw and Poznan overturned Wednesday, spilling an alleged 12 tons of liquid chocolate over four highway lanes, according to The New York Times. Somehow, even the truck ended up crushing the guardrail between the opposite lanes of traffic, coming to a rest across three of the lanes.

Drivers in both directions were stopped as cleanup crews worked to remove the truck and the hardening chocolate from the road. The mild spring sun wasn’t helping the situation. Marlena Kukawka, a media officer for the police in the small town of Slupca told the publication firefighters were using streams of hot water to melt the chocolate and wash it away. The slipper chocolate posed a danger to drivers.

“We have to remove the truck from the highway first,” Kukawka said in a phone interview with The New York Times. “It will take a few hours or more,” she added about the cleanup. Authorities added it would take hours to clean up the mess. The 60-year-old truck driver was being treated for minor injuries, according to Kukawka. It appears the truck is the only vehicle involved in the accident, but it’s not clear how the accident happened.

While the world just lost 12 delicious tons of chocolate, it’s reassuring no one was hurt. The situation could have been a lot worse, especially if the truck landed on another vehicle. Drowning in chocolate sounds pleasant until it’s not. Also, there are far worse substances to have spilled across the highway. It may be a major inconvenient for drivers, but at least it wasn’t gasoline or some other hazardous material. In the grand scheme of driving dangers, liquid chocolate is low on the list.