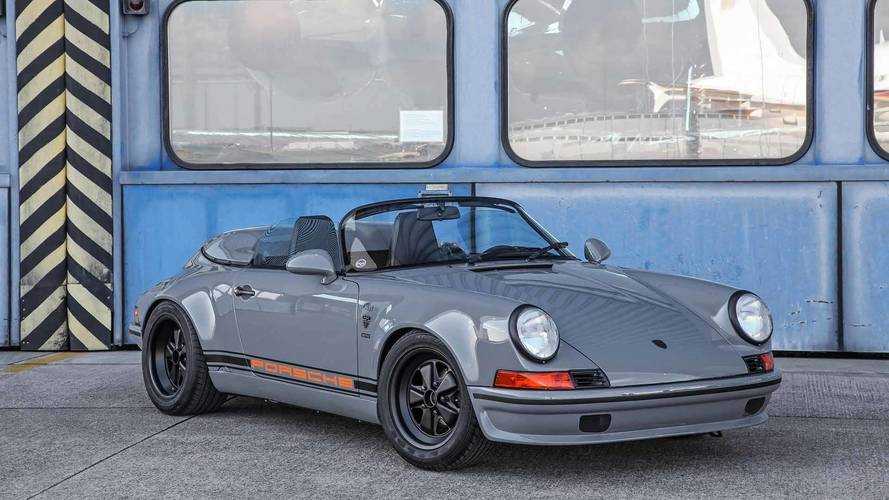 Now that the appearance is sorted, the next step is a major powertrain upgrade.

Germany's DP Motorsport is undertaking a multi-part project that aims to create the ultimate version of the 1989 911 Speedster. The car still awaits the major mechanical upgrades, but the aesthetic upgrades show that this could be an incredibly impressive creation when the job is complete.

The car belongs to an owner in Berlin, Germany. He bought it in California with the conversion from a 1989 911 Targa 3.2 to a Speedster body already complete. However, this person thought that the vehicle looked "too modern," so the vehicle went to DP Motorsport for further modification for a more retro appearance. The firm installed a body kit that took close inspiration from the F-model 911 of the early 1970s but with much wider rear fenders. The tweaks also included a lower front bumper and revised side sills for hiding the oil lines. For an understated but very attractive appearance, painted the body Nardo Gray, fitted black badges, and added black and orange graphics. The cabin has remained largely stock other than a new, Alcantara-covered steering wheel and stylish, metal shift knob.

For now, the only mechanical upgrades are modifications to the torsion bars and H&R spacer discs for widening the wheels. This winter DP Motorsport will take the Speedster back for some serious upgrades, though. New camshafts, throttle body, and exhaust will allegedly push the 3.2-liter engine's output to 260 horsepower (194 kilowatts). A KW Clubsport suspension with modifications for height, compression, and rebound will let the owner tune the setup, and there will be new axle bearings for a tighter feel.

In its single year of production, Porsche only made just over 2,000 units of the 911 Speedster for global consumption. Given the low numbers, it makes sense why this owner would cut up a slightly more common Targa variant if the person is looking for such a highly modified Speedster.

For folks in the market for something more modern, spy shots indicate that Porsche has a new 911 Speedster under development (gallery above) as a farewell to the venerable model's current generation. One again, expect production to be in very limited quantities.

THE Porsche tuner per se is dp motorsport with its operating main business in Overath, near Cologne. Already established in 1973 by Ekkehard ZIMMERMANN, nowadays, his son Patrick ZIMMERMANN and crew make sure that the renowned company's name remains a resounding topic in the Porsche scene – of course, with the active support of the father.

A Berlin-based client – who priorly refurbished a 356 C-convertible almost by himself – assigned dp motorsport to “backdate” a Porsche 911 Speedster as it was perceived as “too modern”. Apparently, this particular Speedster already underwent a Phase 1; manufactured in 1989 in sunny US-American California, the original 911 Targa 3.2 converted, after meticulously detailed work in the late 1990s, into a Speedster. Subsequently, it made its way to Germany.

The Phase 2 upgrade at dp motorsport was implemented by applying the F-Model-Body kits dp11F Carrera-Widebody. Its combination of one inch wider wheel housings, a slightly lowered front bumper, as well as unobstrusively designed side sills that are truly captivating. A brilliant and thoughtful feature: these side sills cover the oil pipes in order to provide a more attractive trim at the bottom edge of the sills. By the way, the Overather expert team developed the design to achieve an even more sporty and vigorous appearance for the elderly 911. The vehicle height adjustment is handled via the shifting of the torsion bars and the usage of H&R spacer discs “improve” the wheels. The existing 2-pipe rear mufflers are visually adapted to the modified rear bumper. Because of the paint job in Nardo-gray, the already extremely flat 911 almost looks like a fighter jet.

For the next winter season dp motorsport is planning on a Phase 3 for the Speedster with the intention to install a - separately adjustable in height, compression and rebound - club sport thread chassis by KW. Additionally, PU-bearings by Superpro will be mounted to reduce the play in the axle bearings. The original 218 HP (= 160 kW) 3,2 l displacement with 5-gear-G50-transmission will gain a power upgrade to ca. 260 HP by using Schrick-camshafts, a bigger throttle valve, an exhaust manifold, as well as an individual adjustment on the engine test bench. The 7x16 inch rims with Continental Sport Contact tyres in 205/55-16 on the front axle and 9x16 with 245/45-16 on the rear axle are the perfect match. This Speedster is already a feast for the eyes. One may be excited about the final result after the next winter season...

Additional information about this astounding project direct at