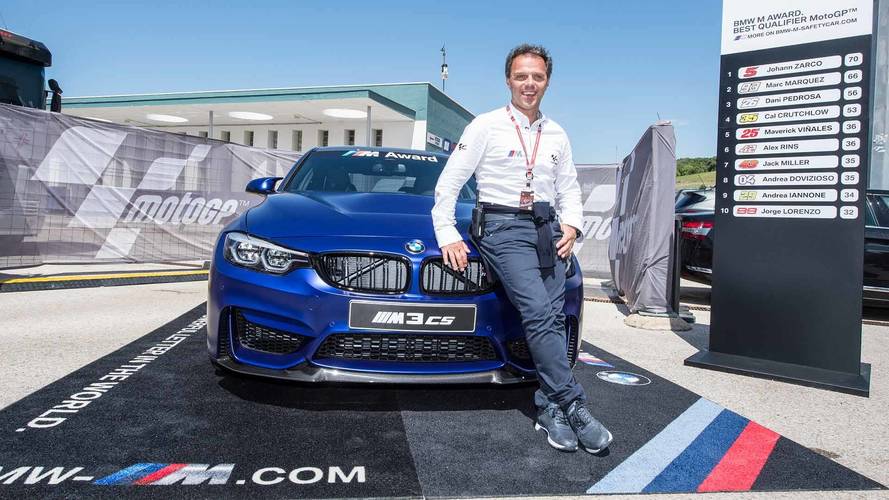 Will Marc Marquez win the car yet again?

The top qualifier in this year's MotoGP series will receive a limited-edition BMW M3 CS as a prize for a season's hard work on two wheels. The Frozen Dark Blue was on display at the recent Spanish Grand Prix at the Jerez de la Frontera circuit. This year marks the 20th season with BMW's M division supplying the Official car of MotoGP, and the 16th time for the season's best qualifier to receive an M car as a reward.

To determine the top rider in qualifying, the racers receive points for their position during the session in each grand prix. After four races so far this season, Johann Zarco currently leads the standings with 70 points. Marc Marquez trails closely with 66 points, and Dani Pedrosa sits in third with 56 points.

BMW will build only 1,200 units of the M3 CS worldwide. The sedans use a 3.0-liter biturbo inline-six engine with 453 horsepower (337 kilowatts) and 443 pound-feet (600 Newton-meters) of torque – a boost of 28 hp (20 kW) over a standard M3. A dual-clutch seven-speed gearbox is the only available transmission. The M engineers are also able to slice 110 pounds (49 kilograms) out of the sedan.

BMW also supplies MotoGP's safety car. The year that role falls on an M5 with M Performance pieces, including lots of carbon fiber additions on the outside and a titanium exhaust. There's also LED lights in the roof and front bumper. Inside, it features the heavily bolstered seats from the M4 GTS.

Highlight in the anniversary season: The new BMW M3 CS is the prize for the MotoGPTM BMW M Award in 2018.
07.05.2018 Press Release
BMW M Power for the fastest qualifier in the MotoGP. The winner’s car in 2018: the exclusive BMW M3 CS (combined consumption: 8.5 l/100 km; combined CO2 emissions: 198 g/km*) in Frozen Dark Blue. Unveiling of the car at the Spanish Grand Prix in Jerez de la Frontera.

Jerez de la Frontera. 2018 is the 20th season with BMW M as the “Official Car of MotoGP” – and in keeping, BMW M GmbH presents a real highlight in the BMW M Award in their anniversary year. The best qualifier in the MotoGP can look forward to an exclusive BMW M3 CS in Frozen Dark Blue at the end of the season. This year’s winner’s car is particularly special since the BMW M3 CS is a special edition limited to 1,200 units worldwide. The BMW M Award winner’s car for 2018 was officially unveiled at the Spanish Grand Prix in Jerez de la Frontera this Saturday.

The BMW M Award has long been an integral part of the BMW M GmbH commitment to the MotoGP, and it will be presented for the 16th time in 2018. Since 2003, the MotoGP rider with the best results in qualifying has been rewarded with an exclusive, individually designed BMW M car at the end of the season. As with the scoring system for the race, the riders receive points for their positions in qualifying at each Grand Prix weekend. The rider who has picked up the most points at the end of the season wins the coveted BMW M Award.

“BMW M GmbH has outdone itself once again with the selection of the BMW M Award winner’s car in its anniversary season,” said Pau Serracanta, Managing Director of the Commercial Department of Dorna Sports, at the unveiling. “The new BMW M3 CS is an impressive high-performance car, and I am confident that the prospect of this fantastic prize will provide our riders with even more motivation to give it their all in qualifying. We are excited to see who will claim this car as their own at the end of the season. The 20thseason as ‘Official Car of MotoGP’ and already the 16th BMW M Award: We are delighted with the long-standing and successful partnership with BMW M.”

“It goes without saying that 2018, as our anniversary season in the MotoGP, is something very special to us,” added Vladimir Bistrivoda, head of MotoGP collaboration at BMW M GmbH. “Which is why we are excited, in our exclusive high-performance limousine BMW M3 CS, to be able to present another very special model from our range of products as the BMW M Award winner’s car. It makes us proud that the BMW M Award has been a coveted award for many years among the MotoGP family – and we want to say thank you for this appreciation by choosing highlights such as the BMW M3 CS as winner’s cars.”

The new BMW M3 CS is the most powerful production vehicle ever in the M3 series. It takes just 3.9 seconds to accelerate from 0 to 100 km/h. Its powerful M TwinPower turbo inline-six-cylinder engine delivers a performance of 460 hp and a torque of 600 Nm. A 7-speed M dual clutch transmission with Drivelogic takes care of the power transmission in the BMW M Award winner’s car. The adaptive M suspension of the BMW M3 CS guarantees the highest dynamic handling in every situation. The already sporty appearance of the car is highlighted by the paintwork in Frozen Dark Blue, the full leather, fine-grain Merino bicolour upholstery, as well as further fittings highlights such as the M steering wheel in Alcantara.

The BMW M Award is one of the many BMW M activities as the “Official Car of MotoGP”. The record holder is Marc Márquez, who has already claimed the BMW M Award five times in a row. Valentino Rossi and Casey Stoner each have three wins to their name. Jorge Lorenzo has been honoured as the best qualifier twice to date while Sete Gibernau and Nicky Hayden have each won the award once.

For more information about BMW M GmbH and the involvement as the “Official Car of MotoGP”, see: www.bmw-m.com

BMW M GmbH is a 100 per cent subsidiary of BMW AG. With its products and services in the business areas of BMW M Automobiles and BMW M Performance Automobiles, BMW Individual, M Sports Options and Packages, BMW Driving Experience as well as Rescue and Operational Vehicles, it is geared towards customers with particularly high aspirations in terms of the performance, exclusivity and individual style of their vehicle. Based in Munich, the company was founded in 1972 as BMW Motorsport GmbH. Since then, the letter M has become synonymous all over the world for success in motor racing and for the fascination of high-performance sports cars for road use.