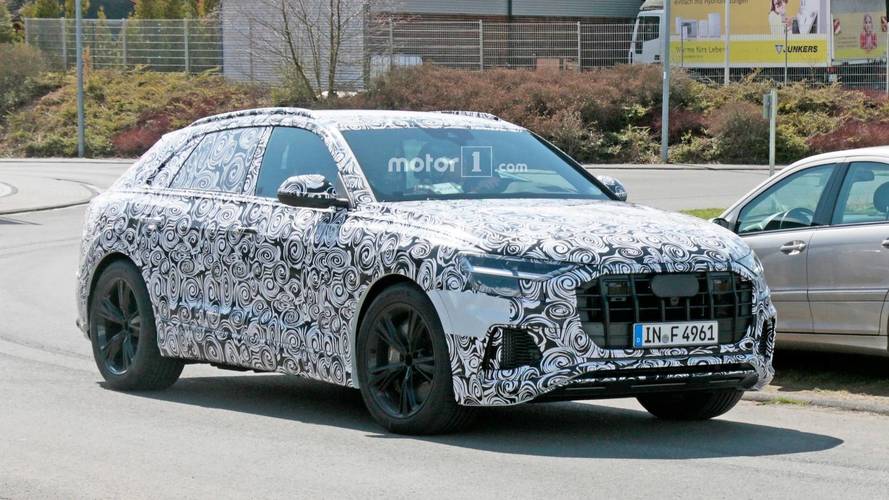 The performance SUV looks aggressive – even underneath all that camouflage.

While we patiently await the all-new Audi Q8 – scheduled to make its debut early this summer – the German marque is already out testing its new performance model, the RS Q8. Spy photos captured the high-output SUV for the first time near the Nürburgring, showing off a number of sporty cues.

Essentially the German version of the Lamborghini Urus, the RS Q8 will come with more power, of course, and better looks to boot. This prototype doesn’t give away much in the way of details – most of the body is completely covered up by camouflage – but there are a few new elements to point out.

For one, the grille is much larger than those found on previous prototypes. It’s also more vented, giving the performance SUV the ability to pull even more air into the engine. There are huge composite brakes on all four corners with six-piston calipers up front, and come wrapped in bigger wheels with performance rubber.

The quad exhaust tips suggest it should be an SQ8, but this prototype is pulling a similar trick to the RS Q3 prototype that was also spotted recently. There’s actually a more aggressive setup hidden behind those quad tips, which we should see on later prototypes. Our spy photographers suggest that this vehicle had a much deeper sound than any Q8 prototypes before it. Underhood, the RS Q8 is expected to wield the same biturbo 4.0-liter V8 as found on the Urus, producing somewhere in the neighborhood of 650 horsepower (484 kilowatts).

The new Audi Q8 will make its world debut in June, before going on sale towards the end of the year. We’ll have to wait a bit longer for the two performance trims to show up, but the 2019 Geneva Motor Show would make an ideal launch location.