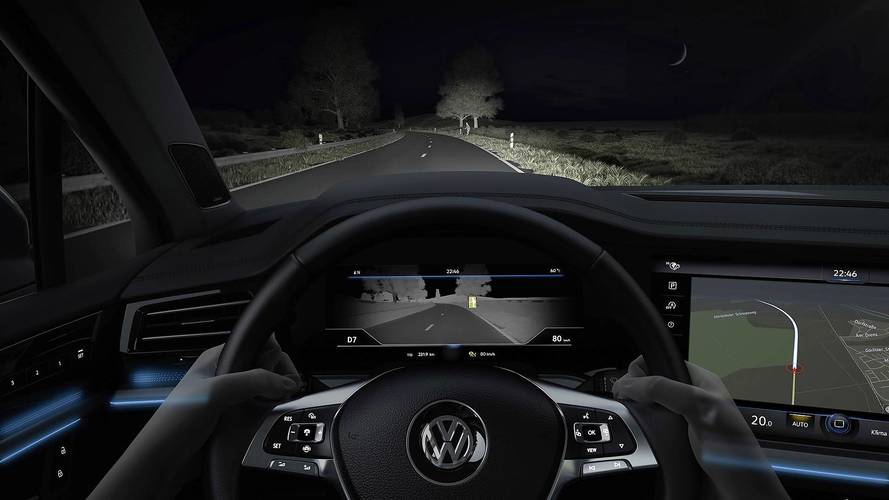 The system can detect animals and people up to 426 feet ahead of the vehicle.

The use of thermal imaging in cars to light up the night is not new. Automakers have used the technology to give drivers a view beyond their headlights in hopes of spotting pedestrian or animals that could enter the path of the vehicle and cause a crash. The technology is also being used in cars for assistive driving aids and autonomous testing. Volkswagen is giving Touareg drivers the night vision technology starting with the 2019 model year.

The system works by integrating a thermal (infrared) image camera in the front of the car, which can detect the infrared radiation humans and other living organism emit. This technology sees far beyond your typical high-beam headlight. The system can detect non-concealed pedestrians, cyclists, and larger wild animals ranging from 10 to 130 meters (32 feet to 426 feet).

The system does more than just highlight possible dangers. For people, the system can predict the trajectory of a person and sound an alert of the predicted trajectory enters what Volkswagen calls the “defined corridor.” The corridor is a set of boundaries along the side of the road the system uses to determine if someone or something is in danger of being hit. Information is relayed to the driver through VW’s Digital Cockpit – the Touareg’s digital instrument panel and screen.

Outside the corridor, pedestrians and animals are highlighted in yellow as the thermal image is colored in black and white. Once the objects enter the corridor (or the trajectory predicts they will enter it), the system highlights the target red. When the vehicle is traveling above 31 miles per hour (50 kilometers per hour), and something is detected in the corridor, the system will automatically turn the imaging screen on in the Digital Cockpit and displays the object.

When traveling under 31 mph (50 kph), a red warning signal lights up in the instrument panel when the thermal imaging display isn’t active. If a Touareg is equipped with a head-up display, a warning chime rings as well as a red single. Along with warning the driving, the braking system is pre-set to provide the highest deceleration rate.

Thermal imaging camera system like the one on the Touareg is not foolproof. Instead, they’re a vital tool to help identify dangerous situations sooner. When driving, timing can be the difference between the life and death – or a seriously expensive repair bill if you crash into an animal.

Technology highlights of the new Touareg – Part 1:
Night Vision protects people and animals when driving in the dark

The new Touareg will be released onto the market packed with a range of innovations designed to help minimise dangerous situations. The new Touareg is the first Volkswagen model available with the Night Vision assist system. A thermal image camera (infrared camera) integrated at the front of the car registers infrared radiation coming from a living organism. If this camera detects people or animals, the assistant warns the driver within the limits of the system. This reduces the risk of endangering pedestrians, especially when away from well-lit city streets.

A detailed look at the system's features: the infrared camera can register objects such as standing, non-concealed pedestrians, cyclists and larger wild animals at a range of 10 to 130 meters in front of the car. Once they reach a defined corridor or – in the case of people – once they are able to enter this corridor due to their trajectory, the driver is alerted via a screen in the Digital Cockpit – the Touareg’s digital instrument panel.

Outside the risk corridor, passers-by and animals are highlighted in yellow in the black and white image created by the night vision system. If they traverse certain boundaries along the road, the figures marked yellow become red. Even if the display for the Night Vision system is not activated in the Digital Cockpit, the screen automatically switches to this mode when danger is detected and at speeds exceeding 50 km/h, and displays people and animals in red. At speeds of less than 50 km/h, a red warning signal lights up in the instrument panel without an active display. In addition, an acoustic warning is issued in parallel in the (optional) head-up display (red signal). At the same time, the braking system is pre-set to immediately provide the highest deceleration rate.

Thanks to the new interactive "IQ.Light - LED matrix headlights" also available in the Touareg, people in a potential danger area are also briefly flashed at speeds of more than 60 km/h when not in urban areas to make them even more visible to the driver and as a warning (without dazzling the individuals concerned). This spotlight is exclusively offered in conjunction with Night Vision. With the combination of Night Vision and IQ.Light – LED matrix headlights, dangerous situations can thus be recognised much sooner and resolved.