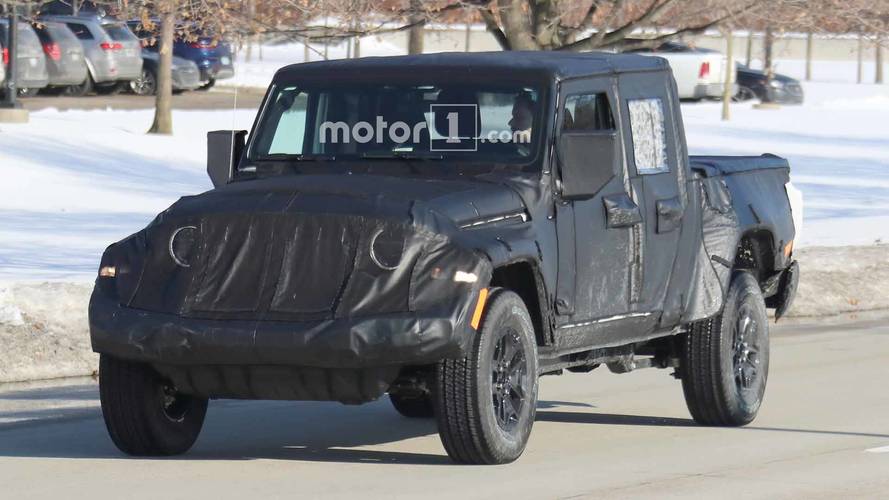 Combining the ruggedness of a Jeep Wrangler and the utility of a pickup seems like a winning combination for Jeep.

The Jeep Wrangler pickup will arrive likely under the Scrambler moniker in April 2019. It's one of the most anticipated models on the horizon, and any chance to spy the upcoming truck is a welcome opportunity. These photos catch the model in a snowy environment and provide a great view at the rear.

Several shots catch the truck parked and without much camouflage on the tailgate (see above). The spray painted pattern doesn't conceal much, and this is our best look at it yet. The piece appears to be a fairly traditional way to access the bed and lacks the complicated opening abilities of recent pickups, like the one on the latest GMC Sierra.

Elsewhere, this Scrambler has the same camouflage as the examples in earlier spy shots. It appears the pickup would look largely identical to the new four-door Wrangler Unlimited but with the addition of a pickup bed on the back. There's no indication that Jeep would offer a two-door version.

The truck's powertrain would come directly from the Wrangler. The base engine is a 3.6-liter V6 with 285 horsepower (213 kilowatts) and 260 pound-feet (353 Newton-meters) of torque, and buyers can upgrade to a 2.0-liter turbocharged four-cylinder with 270 hp (201 kW) and 295 lb-ft (400 Nm) of torque. Both are available with a six-speed manual or eight-speed automatic. It's not clear yet whether the Wrangler Rubicon's combination of a 4:1 low-range ratio for the transfer case and locking differentials would be available on the Scrambler, but the tech would likely make the pickup one of the most capable off-roaders in the segment.

A plug-in hybrid engine will potentially join the truck's powertrain lineup later but will definitely be available for the Wrangler.

While sales of the Scrambler will reportedly begin in about a year, the model will debut before that. Rumors put the unveiling at the 2018 Los Angeles Auto Show in November.