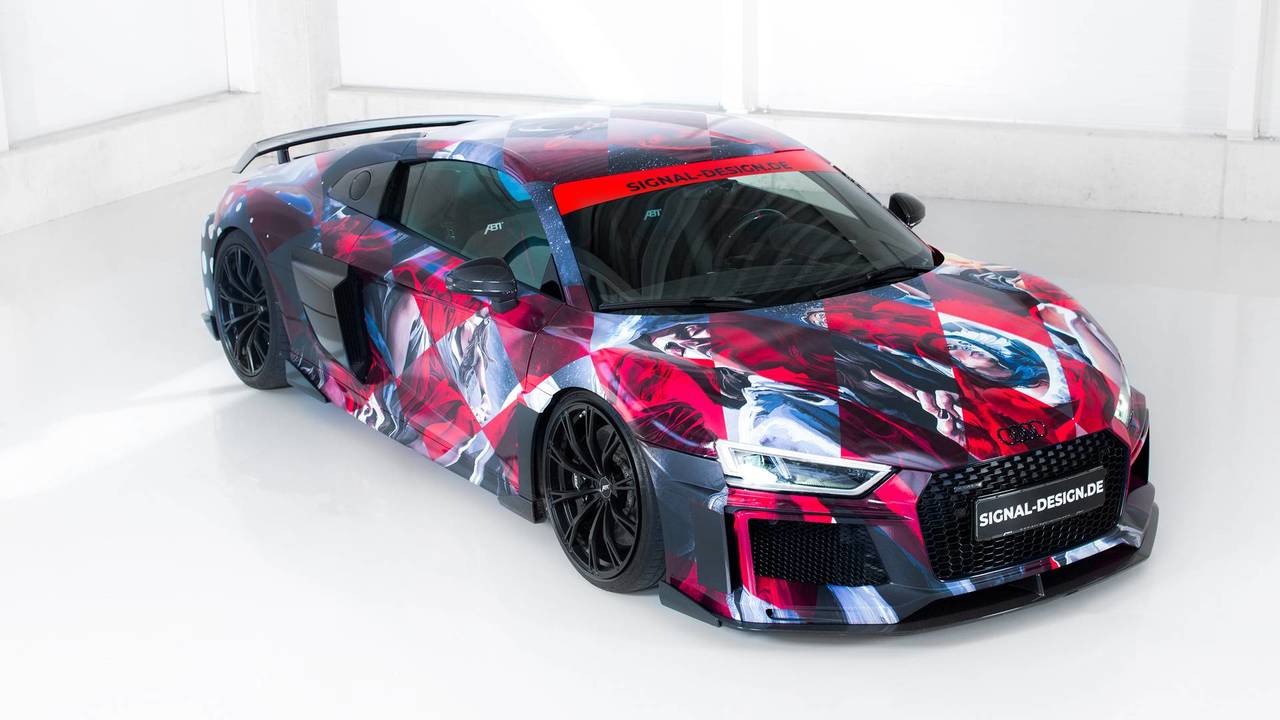 Art cars are not new. Artists use the automobile as a blank canvas for both beautiful and exciting works of art. No two are alike, and that’s the beauty of the art car. BMW is probably most famous for such creations, with a plethora of glammed-up examples. But other automakers have dipper their creative toes in the water, such as Rolls-Royce and Alfa Romeo in the recent past. Audi has, in the past, done an art car as well, but the Audi R8 here is not an official project of the automaker. Instead, aftermarket tuning company ABT Sportsline, known for taking performance Audi vehicles and turning them straight to insanity, commissioned the car.

In preparation of two different automotive events that overlap in May – the Tuning World Bodensee show in Germany and the legendary Wörthersee-Treffen at Lake Wörth in Austria – the company commissioned cartoonist Timo Wuerz to spruce up an R8 with his design. Wuerz and ABT teamed up with German film wrap company SIGnal Design to complete the one-off project that looks interesting.

The design, overlaid with a pink diamond pattern, features several women with a night-sky pattern throughout. Near the rear of the car, the diamond pattern fades away, replaced by white dots that eventually blend on the rear bumper, completely covering the rear in white. It’s a striking design that feels artistic without being overpowering. The athletic lines of the R8 accentuate the design. The car could have quickly become a caricature.

If you’ve never heard of Wuerz, you’ve heard of the companies he’s worked for. They range from automakers such as Volkswagen, Suzuki, and Daimler to Adidas, The German and Luxembourg Post, and Lamborghini Beverly Hills. He’s also worked with Disney, Marvel, and DC Comics. He’s got some talent and some serious clients under his belt.

ABT is sending cars to both events with the wrapped Audi R8 heading to Lake Wörth. Wörthersee-Treffen takes place May 9-12 if you’re in the area.

Tuning fans will have a tough decision to make in 2018: Not for the first time, the Tuning World Bodensee show at Lake Constance in Germany (10 - 13 May) and the legendary Wörthersee-Treffen at Lake Wörth in Austria (9 - 12 May) will overlap considerably. But you can only be in one place at a time! As a company, that is a little easier and ABT Sportsline will be presenting interesting highlights at both events.

At Lake Wörth, a very special masterpiece awaits visitors at the H&R stand, which also presents ABT Sportsline 2018. Cartoonist Timo Wuerz, who regularly creates drawings for international companies, designed the first ABT Art-Car together with German film wrap specialist SIGNal Design GmbH from Schwäbisch Hall – and what a car it is. The motto of the hot R8 is: Nun meets Abt (“Abt” is the German word for “abbot”). It goes without saying that the sports car has a lot more to offer that could lead car enthusiasts into temptation.

The strictly limited performance cars ABT RS4-R and RS5-R are virtually technical twins, yet still completely different in the sum of all parts. While the Avant with 530 HP (390 kW) thanks to ABT Power will head to Austria, the equally well-endowed coupe will shoot straight to Friedrichshafen on Lake Constance. It will be presented as part of the “Audi Sport Tuning” special exhibition in hall B2 at stand 415. Compared to its slightly more practical station wagon cousin, it is two tenth of second faster when accelerating from 0 to 100 km/h (0 - 62 mph): it accomplishes this standard sprint in just 3.6 seconds. When it comes to sound, however, the two agree: The ABT sport exhaust system, which is part of the performance concept, impresses with a fantastically charismatic V6 sound. Visually, both high-speed vehicles are equipped with similar styling elements from the Bavarian tuner: The aerodynamics packages each include ABT front lip, front flics, front grille with RS4-R or RS5-R logo and a rear skirt add on. Front blades and wheel arch vents can be added as optional extras. The rear spoiler and the sideblades are exclusively available for the RS5-R.

The athletically styled ABT SPORT GR alloy rims, which enhance both vehicles, have a strongly concave rim base as their primary design feature. They are fitted on the ABT RS4-R for Lake Wörth in 20” and on the RS5-R for Friedrichshafen even in 21”. Additionally, the Bavarian tuner upgraded the standard suspension with ABT sports stabilizers and ABT height adjustable suspension springs. This means the two cars are not only ready for a comfortable “lake cruise”, but can easily handle even tight hairpin bends in the mountains.