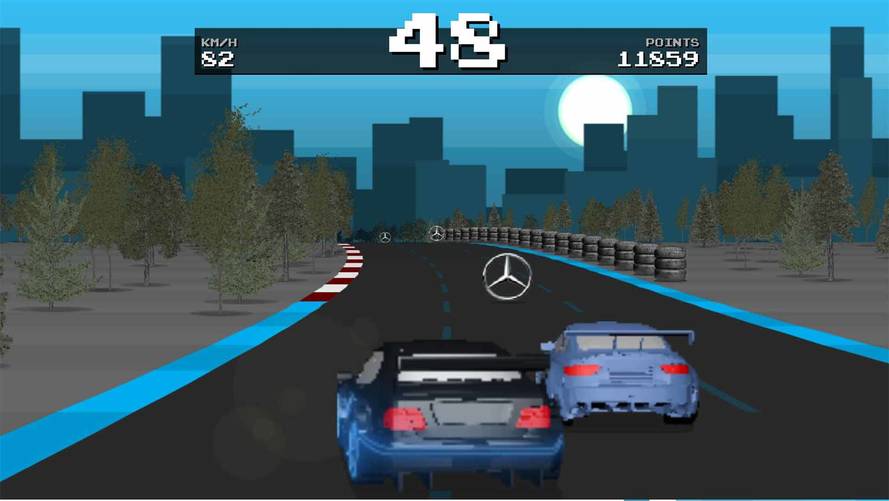 You can even win a visit to Mercedes' final DTM race.

Mercedes-Benz is entering its final season in the DTM after 30 years of originally entering the series and scoring multiple championships over the years. The change feels like the end of an era. However to commemorate three decades of racing in the German touring car championship, the company came up with a neat little game that takes inspiration from vintage arcade games.

The game's biggest inspirations appear to the behind-the-back racers with pixel graphics like Pole Position or Rad Racer. Instead of racing against time, though, you aim to collect as many points as possible in 60 seconds. Collecting Mercedes logos provides a speed boost, and the faster you go, the quicker your score increases. Collisions with other vehicles reduce your car's speed. The concept is simple but works fine for a one-minute game. The music sounds straight from a Commodore 64, too.

The retro-inspired game doubles as a contest, too. Mercedes will choose five players randomly to attend to the company's last DTM race at Hockenheim in October and take a ride in the C63 DTM racing taxi.

Last year, Mercedes announced plans to leave DTM at the end of the 2018 season. The company will transition to competing in Formula E for the 2019/2020 season.

"Formula E is like an exciting start-up venture: it offers a brand new format, combining racing with a strong event character, in order to promote current and future technologies," Mercedes motorsport boss Toto Wolff told Motorsport.com. "Electrification is happening in the road car world and Formula E offers manufacturers an interesting platform to bring this technology to a new audience - and to do so with a completely new kind of racing, different to any other series."