2019 Mercedes GLC Facelift Spied Inside And Out 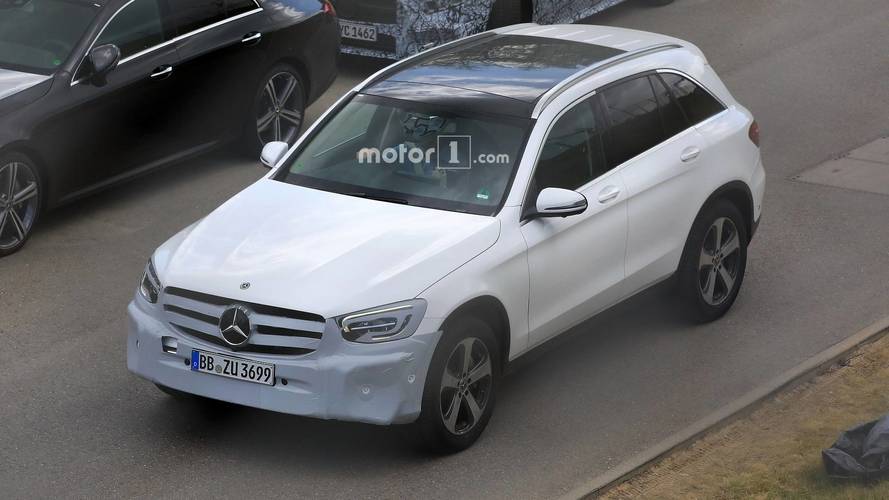 The current GLC 63 S was spotted at the Nurburgring, presumably hunting for the SUV lap record.

Having seen the GLC F-Cell last fall, there’s not much of a secrecy regarding the changes the conventionally powered crossover will be going through for its mid-cycle refresh. Our spies caught on camera a thinly camouflaged right-hand-drive prototype in the company of a long-wheelbase China-only C-Class and a still disguised prototype of the new A-Class.

The GLC was only hiding its front fascia where the bumper will be going through a nip and tuck and the grille might also be subjected to minor tweaks. Mercedes was kind enough not to fully conceal the headlights, thus giving us an opportunity to have a look at the new graphics lending a more high-tech appearance. These seem to be different than those of the aforementioned F-Cell and make the crossover seem more modern.

The back of the car appears to contain the exact same taillights as the current GLC, but things will likely change with the refresh as Mercedes is expected to make some updates to the rear lighting clusters as well like it has done with the closely related C-Class models. The bumper will also go under the knife, but nothing to write home about.

Our spies had the chance to take a good look inside the cabin where unsurprisingly the prototype had the 12.3-inch digital driver’s display and the bigger 10.25-inch infotainment system of the GLC F-Cell (pictured above) and the C-Class facelift. We can also observe the new multifunction touchpad with handwriting recognition, also in line with the two models we’ve mentioned.

The refresh Mercedes is working on could also bring a long-wheelbase derivative as per a roadmap from September 2017. If that’s the case, the extended GLC will likely be built and sold only in China, just like the stretched C-Class, E-Class, and the newly launched A-Class L Sedan.

On a related note, the current GLC in the top-spec AMG 63 S guise was seen earlier today at the Nürburgring. As the short video above shows, the driver was really pushing it hard, up to the point he went slightly off track. According to a report from BridgeToGantry, AMG has the Green Hell all to itself this Thursday to allow racing teams get ready for the grueling Nürburgring 24 Hours endurance race scheduled to take place in a couple of weeks.

Could the GLC 63 S be gunning for the fastest SUV title around the ‘Ring? Maybe, although AMG’s boss Tobias Moers said recently he is not interested in taking down records at the Nordschleife. Well, maybe with exception of the Project One. If by any chance the crossover is attempting to set a new record, it will have to beat the Alfa Romeo Stelvio Quadrifoglio and its time of 7 minutes and 51.7 seconds.