It's more than just a “Rabbit with a trunk.”

The Volkswagen Jetta is all-new for this year. We already tested it and it’s really good – smooth, easy to use, smart, quiet, and practical. It’s the seventh generation of the compact sedan and, to highlight all the improvements from the last nearly four decades, the German manufacturer is comparing the new model to the original Jetta, as represented by a 1982 model recently acquired and restored by Volkswagen Group of America.

Launched in the United States in 1980, the Jetta was basically a “Rabbit with a trunk.” Sharing its underpinnings with the Golf, it defined a new segment for the automaker and was offered as a two- and four-door model in the 1980s. It was the sixth vehicle in VW’s lineup in 1980, offered along with the Rabbit, Dasher, Scirocco, Vanagon, and VW Pickup.

The new Jetta’s main characteristics, the healthy list of standard features, simplified engine portfolio with only one motor, and tight steering, come as a direct heritage from the model’s first generation. When it debuted, the original Jetta was available with only one 1.6-liter naturally aspirated gasoline engine, and was nicely equipped with power-assisted brakes and AM/FM cassette-player combo. The only options were a three-speed automatic transmission, versus an eight-speed automatic for the 2019 model, air conditioning, sunroof, tinted glass, and aluminum-alloy wheels. 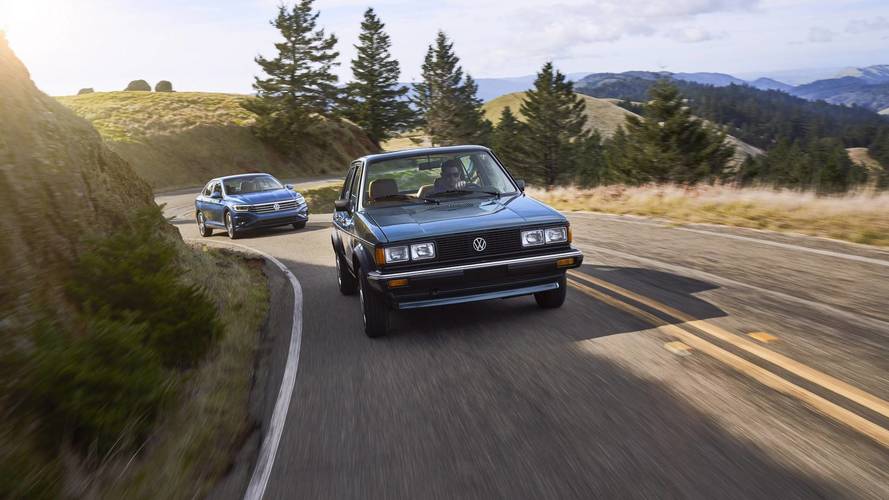 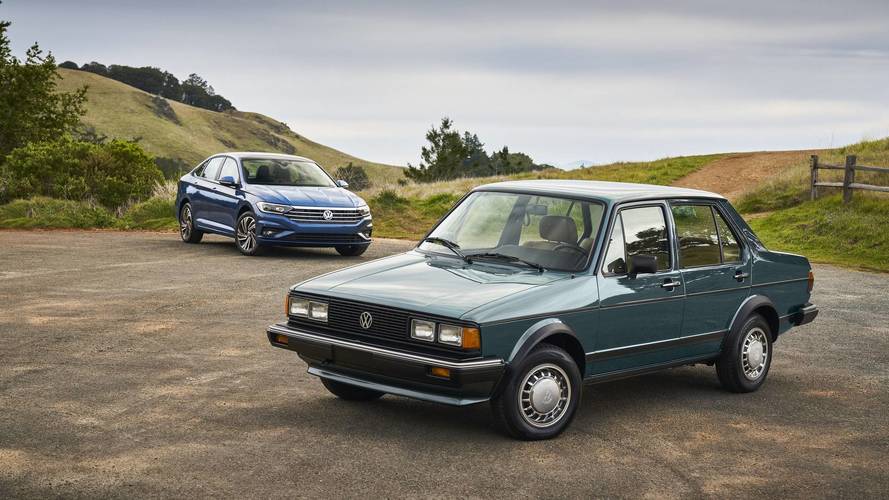 A quick look at 39 years of automotive development show the new Jetta is larger in every possible exterior dimension and has more room in the interior and in the boot. Even a simple comparison between the side rearview mirrors of the first and latest Jetta reveal just how much cars have evolved – the 1980 Jetta had a side mirror that you could adjust without rolling down the window, while the 2019 Jetta has an electrically-adjustable mirror, which can offer the Blind Spot Warning system that alerts drivers to vehicles they might not see otherwise.

Check out the press release section for more information.

Herndon, VA (April 25th, 2018) — Originally billed as a “Rabbit with a trunk,” the first generation Volkswagen Jetta was designed for the growing number of buyers worldwide who wanted extra cargo space and the style of a sedan in a compact car. Shortly after its U.S. introduction in 1980, the Jetta became the best-selling German model in America, with more than 3.2 million models sold since.

Comparing the original generation of the Jetta, as represented by a 1982 version recently acquired and restored by Volkswagen Group of America, to the all-new 2019 Jetta demonstrates just how far the VW brand has advanced in nearly four decades—and what traits have remained true since its introduction.

When it first hit American roads, the compact Jetta defined a new segment for Volkswagen. The brand had considerable success with the subcompact Rabbit in the late 1970s, following the end of Beetle sales in the United States. Built off the Golf platform and named for the German word for “jet stream,” the Jetta two- and four-door versions were the sixth models in the VW lineup for 1980, along with the Rabbit, Dasher, Scirocco, Vanagon and VW Pickup.

For its era, the Jetta offered a standard amount of power—76 horsepower from a 1.6-liter inline four-cylinder engine. More important was its handling prowess, tuned to offer a tighter road feel than the other compact vehicles of its era. It had a healthy list of standard features, from power-assisted brakes and AM/FM cassette-player combo, to cut-pile carpet and intermittent wipers. The only options were a three-speed automatic transmission (in place of the standard five-speed manual), air conditioning, sunroof, tinted glass, and aluminum-alloy wheels.

*EPA estimates for older models were revised lower than their original figures in subsequent years.

At first glance, the biggest difference between 39 years of automotive development isn’t just size or an extra seating position. While the 2019 Jetta is larger in every exterior dimension, its technology drives the most striking evolutions. LEDs were still only for calculators in 1980; today, the Jetta uses LED headlights and taillights along with LED Daytime Running Lights (DRLs) that create a light “signature.” In addition, a 10-color interior LED ambient lighting system is available.

Driver-assistance features in the first-generation Jetta included such touches as a driver’s side rearview mirror that you could adjust without rolling down the window. The side mirror on the 2019 Jetta is electrically adjustable, and can offer the Blind Spot Warning system that alerts drivers to vehicles they might not see otherwise. A rearview camera is standard as well. Other available driver-assistance technology available on the 2019 Jetta—like Forward Collision Warning and Autonomous Emergency Braking (Front Assist), High Beam Control (Light Assist) and Lane Departure Warning (Lane Assist)—weren’t available on any vehicle in 1980. And where the original Jetta did not have cruise control, available Adaptive Cruise Control (ACC) on the 2019 Jetta can work in stop-and-go traffic to resume speeds when traffic clears.

Of course, technology has also made the interior of the Jetta a much more pleasant place to spend time. Music in the original Jetta came from AM/FM radio or a cassette tape player. AM/FM radio has stood the test of time, while cassettes have given way to satellite radio and music streaming. The 2019 Jetta has a touchscreen infotainment system with standard Volkswagen Car-Net® App-Connect technology that offers compatible smartphone integration with the three major platforms—Apple CarPlay™, Android Auto™ and MirrorLink®.  The new Jetta is the also the first Volkswagen in the U.S. to offer the available eight-speaker BeatsAudio® system. And despite its increased size, safety and features list, the 2019 Jetta has significantly better EPA-estimated fuel economy than its ancestor.

Yet some features of the seventh-generation Jetta have remained unchanged. In 1980, Car and Driver’s David E. Davis said “the big trunk, the roomy, comfortable interior, and the remarkable quiet at 75 miles per hour make the Jetta a lovely car for the serious driver.”

The 2019 Volkswagen Jetta will be available in S, SE, R-Line®, SEL, and SEL Premium trim levels and is expected to arrive at U.S. Volkswagen dealers in the second quarter of 2018.