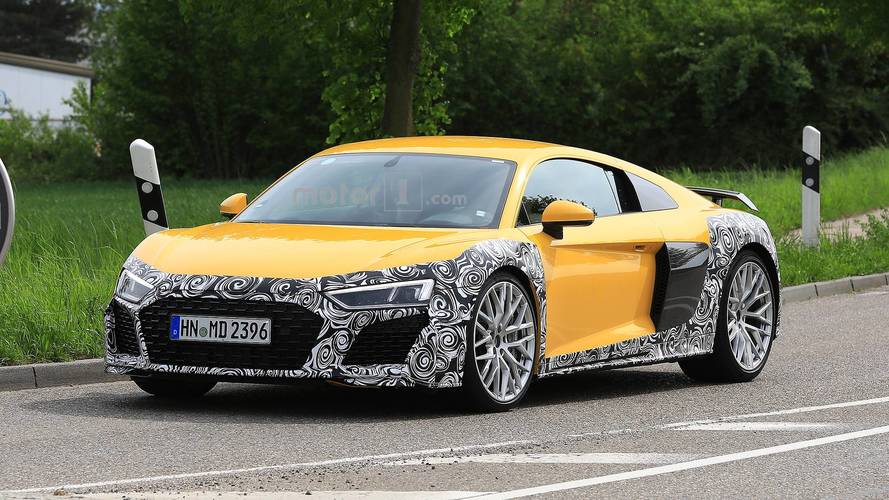 Is Audi gearing up for the R8’s swan song?

Back in October, our trusty spy photographers caught a glimpse of an Audi R8 wearing a revised rear fascia with massive oval exhaust tips. We thought it could be the R8 GT, but a lot has changed since then. In March, Audi said its mid-engined supercar wouldn’t get a third generation, meaning the R8’s time is likely running out. That same month, Audi squashed rumors a V6 version using the company’s biturbocharged 2.9-liter V6 mill. Now, we have spy photos of an Audi R8 out testing with a redesigned front fascia and that rear fascia we saw late last year.

However, there is one difference between what we saw last year and the spy photos we have now. The exhaust tips, while still massive and oval in shape, don’t have the rolled tips we’ve previously seen. Instead, they have perforations around the edge, which are often used to make the car sound better. If this is the hardcore GT version with over 640 horsepower, then Audi is working hard to make sure you get a noise violation ticket.

The new front design gives the R8 the same wide and narrow grille that’s shared with the Audi A6, A7, and A8. Audi also modified the side intakes, which are now covered in conventional mesh just like the grille. The headlights appear unchanged. There seems to be some update to the side skirts, but a closer inspection is needed.

The rear shows the same rear fascia we saw earlier with the mesh grille pattern stretching from corner to corner. The space where the license plate sits is also mesh, but the design doesn’t appear to add any significant amount of area dedicated to additional cooling or ventilation. There is a horizontal slat on the upper section of the rear diffuser.

Rumors of a V6 R8 continue. The understated design hints that maybe this R8 is more of an entry-level offering with that long-rumored 2.9-liter V6 producing around 450 hp. Or, it could be 2.5-litre five-cylinder with over 400 hp, though that’s unlikely. Either engine could undoubtedly bring the R8’s cost down and possibly increase sales. Even with less power, a sprint to 62 miles per hour (100 kilometers per hour) would still clock in at around four seconds.

Even with Audi saying there won’t be an all-new R8 after this generation, it looks like the German automaker still thinks the supercar has plenty of life left in it. If sales tick upward, maybe Audi will change its mind. Until then, we just have to see what kind of R8 we’ll get next.