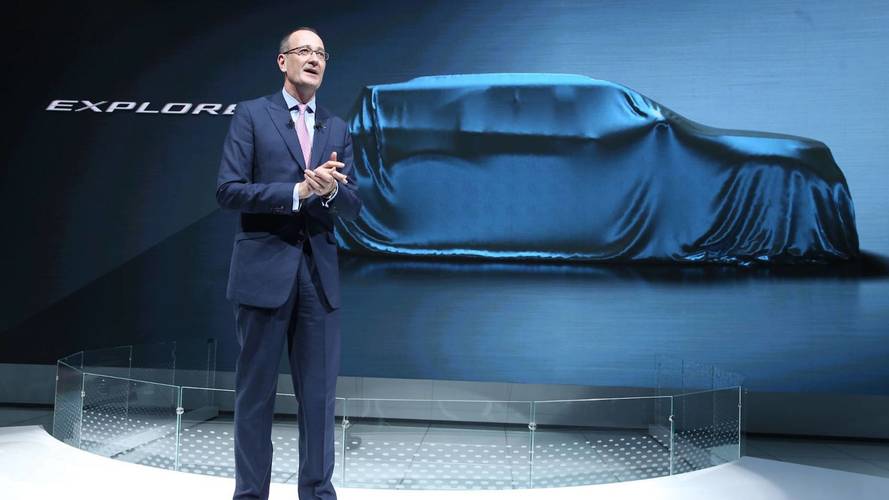 The new SUV should be here sometime in 2019.

The Bronco isn’t the only SUV you should be excited about from the Blue Oval. Ford today teased its upcoming new Explorer at the Beijing Motor Show in China, hiding the new SUV under a large blue sheet ahead of its debut next year. Though we don’t learn much from this lone teaser image, there are some key design elements to point out.

For one, the new Explorer appears to be a bit smoother than the current model – the front fascia is less tapered, and the wheel wells are larger and more rounded. The hood is also shorter, and the roofline is more raked to give the large SUV a sportier appearance. Up top, there appears to be a roof rack, the side profile previews a large beltline that sweeps upwards towards the rear, and the tailgate is now more upright.

Unfortunately for fans of the Blue Oval, you’ll have to wait until at least 2019 to see the new Explorer in the flesh. The SUV will be built and sold in China, with the U.S. next expected to arrive next year. Rumors also point to a new rear-wheel-drive platform – a modular CD6 setup – that will also underpin a Lincoln SUV as part of Ford’s $5 billion investment in its luxury marque.

Along with a new platform, the 2020 Ford Explorer will also get a performance-oriented ST model, similar to the Edge before it. That new Explorer ST could come with upwards of 400 horsepower courtesy of a 3.0-liter biturbo V6 off the Continental and MKZ. It should be a vast improvement over the current 365 hp (272 kW) and 350 lb-ft (474 Nm) of torque found on the Sport model. A hybrid model is also rumored.

Look for the new Explorer early in 2019, most likely at the Detroit Auto Show. Pricing for the all-new SUV should start somewhere in the low $30’s, with the range-topping ST model coming close to $50,000.