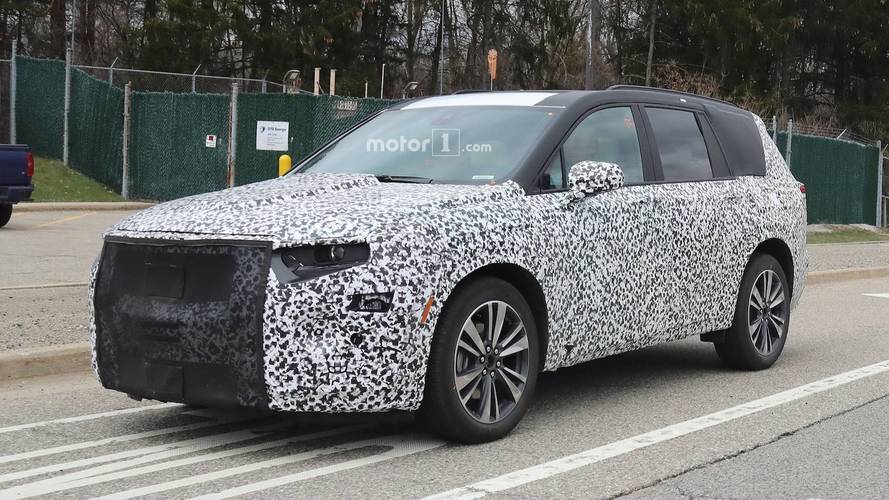 The new SUV should make its debut before the end of the year.

First came the XT5 (succeeding the SRX, of course), followed recently by the smaller XT4. Now Cadillac is working on an SUV that’s even larger than the two. The aptly named Cadillac XT6 will join the range as the flagship SUV alongside the CT6 flagship sedan. Details on the new SUV are still pretty slim, but our spy photographers managed to capture the high-riding vehicle testing ahead of its debut.

The three-row SUV will rival luxury vehicles like the Mercedes-Benz GLS, Acura MDX, Infiniti QX60, and Audi Q7, among others. It will ride on the same C1XX platform that currently underpins cars like the Chevrolet Traverse and Buick Enclave, but will stretch out a bit longer than the 204.3-inch SUVs.

Design wise, expect the new XT6 to borrow a number of cues from the XT4 and XT5 before it. This won’t be a shrunken down Escalade, for what it’s worth. The spy photos don’t give away much in terms of the final design – the headlights and taillights are non-production units, and even the wheels look like they could be replaced with something more luxurious – but the overall shape and size provides us an idea of what to expect.

Power will come from either a 3.0- or 3.6-liter V6 for the entry-level trim, producing around 335 horsepower (249 kilowatts). A range-topping biturbo V6 is also likely, producing somewhere in the neighborhood of 400 hp (298 kW), but don’t expect the 4.2-liter biturbo V8 from the CT6 to carry over. An eight-speed transmission and all-wheel drive should come standard.

What will carry over from the CT6 to the XT6, though, will be technology. The three-row SUV is expected to get Cadillac’s Super Cruise hands-free driver assist, as well as the latest Cue interface with a 10-inch touchscreen, and a video rear-view mirror. We should see the new XT6 later in the year, likely at the Los Angeles Auto Show, before going on sale early in 2019.