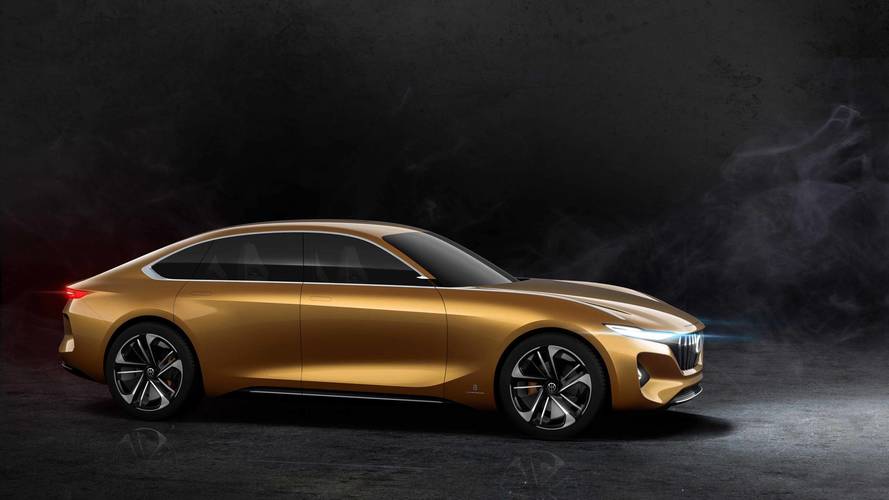 Pininfarina keeps things sleek and simple when imagining the shape for this high-tech, electric sedan.

Pininfarina continues its ongoing partnership with the Hong-Kong-based electric automaker Hybrid Kinetic Group by introducing the new H500 sedan concept at the Auto China show in Beijing. The model is a more compact followup to the earlier H600 concept from last year's Geneva Motor Show.

Like the other concepts in this series, Pininfarina opts for a smooth, rather minimalist style for the H500. The model features a downward sloping nose with raised sections for the fenders, and a relatively narrow grille with vertical slats connects to squinting headlights. In profile, the roof flows back to a short tail. Chrome accents around the side windows add a visual flash to the otherwise understated design. The tail features wraparound taillights that accentuate the four-door's width.

Inside, Pininfarina puts an emphasis on the H500 being high tech. The driver gets a wide digital display for the instruments, and there's a second, even broader one above it that spans the entire dashboard. Another screen on the center console appears to handle HVAC duty, and the passenger even has his or her own little display to play with that's in the door panel.

Occupants in the back get a shared screen between the seats. They also each have displays in the door panels, too.

"Hybrid Kinetic Group is a sound, crucial partner for Pininfarina," the design house's CEO Silvio Pietro Angori said in the concept's announcement. "We are creating a new range of electric vehicles together and preparing the way for their commercial debut with the presentation of the first Hybrid Kinetic produced car for the international market."

Hybrid Kinetic Group imagines a production H500 potentially packing 402 horsepower (300 kilowatts) from its electric motors and the ability to sprint to 62 miles per hour (100 kilometers per hour) in 4.5 seconds. A range extender would provide a driving distance over 621 miles (1,000 kilometers).

Pininfarina is currently under the ownership of India's Mahindra and Mahindra. In addition to doing contract work for firms like Hybrid Kinectic Group, the Italian design house is working on a model of its own – an electric supercar that should arrive in 2020.

Turin, 25 April 2018 – Pininfarina and Hybrid Kinetic Group add new members to the family of electric cars born out of their collaboration at the Auto China 2018 in Beijing, confirming their joint effort to develop clean energy vehicles while at the same time continuing to refine the identity of Hong Kong's high-tech brand. World premiere for two new models, the H500 saloon and the 4-seater K350 SUV, on display alongside the HK GT gran turismo, which was presented a few weeks ago at the Geneva Motor Show.

The three cars, which share a clear, straightforward design language in perfect Pininfarina style, are all equipped with the cutting-edge technology developed by HK for the traction system, with battery, electric motors with a power rating of over 300 kW, control unit and a range extender that enables a range of over 1000 km to be achieved. The three models are capable of reaching a top speed of 250 kph and acceleration from 0 to 100 kph in 4.5 seconds (the saloon) and 4.7 seconds (the SUV). It is exactly this advanced technology, together with better ergonomics and sophisticated materials, that embody the philosophy of the Hybrid Kinetic Group.

The first of the two new Pininfarina products for Beijing is the H500 electric saloon that combines elegance and sportiness, pure forms and sophisticated details, designed for a dynamic lifestyle. The body is characterised by inclined ribbing that traverses the vehicle, giving tension and lightness and defining full, sober volumes. The front grille, now a signature HK feature, has even more character, while the two side air intakes emphasise the sporty, youthful positioning. The interior, featuring four single units like four comfortably protective cocoons, is a multimedia experience, with adjustable touch screens for both front and rear passengers, as well as a touchscreen that slides on the door panels making it easier to share entertainment.

The K350, on the other hand, is the most compact SUV in the range. Its proportions are perfect, its volumes lie well on the wheels and its “body” is sturdily athletic. With the K350, the evolution of the codes and DNA created by Pininfarina for HK points the product in the direction of a wider, certainly young demographic, and an all-round use of the vehicle due to a design in which refinement and elegance coexist naturally with strength and sturdiness. The extremely refined seats become the fulcrum of the interior, bringing the passengers into contact both emotionally and architecturally and creating a light structure that shapes the space around it.

Finally, the HK GT, fresh from the critical acclaim it recorded at the Geneva Motor Show, is an elegant, refined and comfortable special car that skilfully combines pure design with environmentally friendly technology. And with a strong personality, characterised by the gullwing door opening that makes it unique and outstanding in the GT panorama.

“Hybrid Kinetic Group is a sound, crucial partner for Pininfarina”, explains CEO Silvio Pietro Angori. “We are creating a new range of electric vehicles together and preparing the way for their commercial debut with the presentation of the first Hybrid Kinetic produced car for the international market. The three models presented in Beijing are just another step forward in a long-term and fruitful relationship”.

Pininfarina was the first Italian design house to provide styling and engineering services to Chinese car manufacturers from 1996 onwards. Since then, Pininfarina has expanded its range of activities by developing partnerships with manufacturers such as AviChina (Hafei), Chery, Changfeng, Brilliance, BAIC, JAC and others, for which highly commercially successful vehicles have been designed, such as the DX7, the first outcome of collaboration between Pininfarina and South East Motor-SEM, which was followed in 2016 by the DX3 concept, a compact SUV that anticipates the next production car, also developed by Pininfarina in Italy.

In 2010 Pininfarina Automotive Engineering Shanghai (PAES) was set up with the aim of locating a design development satellite in Shanghai, the strategic Automotive site for the Asian area. Today PAES is a consolidated outpost of commercial development and design creation that can count on a multicultural team of about 30 people that give the Chinese headquarters of Pininfarina a strong international character and a global vision in the daily challenge of an increasingly demanding market.