[UPDATE, April 26] 13 new spy shots have been added at the beginning of the gallery, below.

The current Renault Twingo dates back to 2014, and new spy shots reveal that a styling update is on the way for the little hatchback. The changes appear to maintain the Twingo's cute, friendly aesthetic. 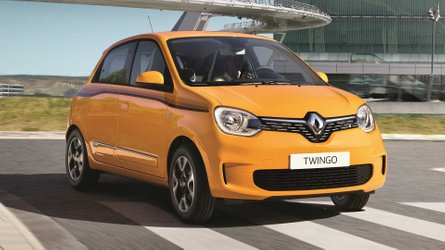 The biggest changes to the front are in the lower fascia. There are new intakes in each corner, which lend a somewhat sporty aesthetic. The center section appears to be a little more rounded, too. There's lots of camouflage, but there don't appear to be major changes elsewhere. The upper grille and headlights appear to have same shapes as on the current Twingo.

At the back, there are revised tailights that appear to have a rounder shape and a different layout with a rectangular white section in the center. The bumper appears to have a completely different shape. It has a new taper that adds some visual interest to the tail, rather than the current design that's fairly flat.

These photos don't provide a look at the cabin but expect Renault to take the opportunity to update things in there. Material changes and infotainment improvements are the most likely tweaks.

This test mule also has an exhaust the pokes out of the rear corner, instead of the semi-hidden layout from most trims of the existing model. This could indicate that Renault is evaluating some powertrain changes for the hatchback.

The existing Twingo is available with a range of tiny, rear-mounted engines. The base unit is a 1.0-liter naturally aspirated three-cylinder with 70 horsepower (52 kilowatts). There's also a turbocharged 900cc three-cylinder with 90 hp (67 kW). The range-topping GT model gets a 110-hp (82 kW) version of this tiny engine.