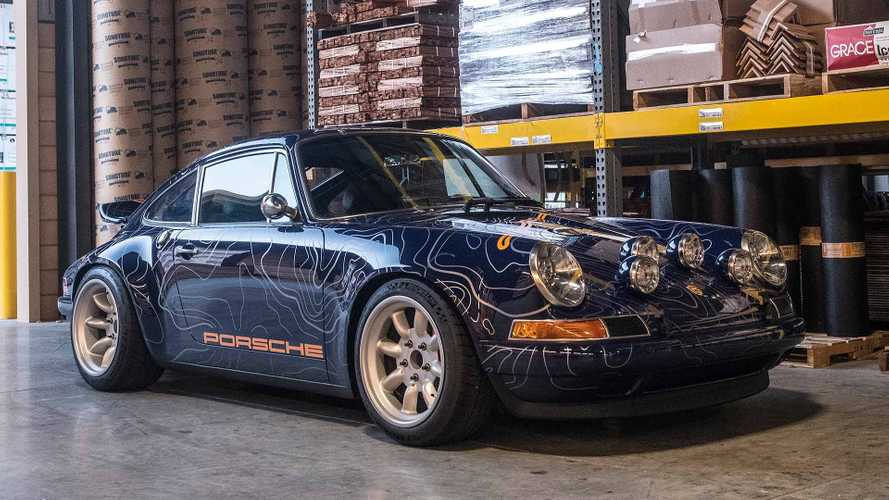 The body features a topographical map of Mulholland Drive.

Singer Vehicle Design is showing off a new project on Facebook, and the exterior makes the coupe's purpose obvious from anyone's first glance. The complex pattern covering the body is a topographical map of Los Angeles' Mulholland Drive – a road famous for its curves. As usual, Singer's work here is absolutely beautiful.

Three Singer 911s Set For Goodwood, Including One New Model
⠀

911 Restored By Singer-Williams At Pebble Beach Is Porsche Perfection

In the '60s and '70s, Mulholland Drive became a common site for late-night, illicit races among high-powered machines (read a report from the period, here). Singer's reimagined 911 appears to take its inspiration from this period. For example, the bank of rally-inspired lights on the hood would be perfect for illuminating the curvy road during a nighttime run.

This reimagined 911 appears to use the 964 generation available from 1989 to 1994 as a starting point, and Singer does something fascinating at the rear. Rather than completely dumping the model's deployable rear wing and smoothing out the tail, the firm installs a fixed spoiler there. The result pushes the airfoil slightly away from the body and creates a shape at the back that you don't usually see on a Porsche. It's quite an attractive touch.

Unfortunately, Singer doesn't provide any interior photos of this car, and its Facebook post about the car offers no details about it. The major cabin detail that's visible in these pictures is that there's a body-color roll cage inside, which further points to this 911's intended use.

Singer offers its reimagined 911s in multiple states of tune with 3.8-liter or 4.0-liter flat-six engines. The top version is the result of a collaboration with Williams Advanced Engineering, and the mill pumps out 500 horsepower (372 kilowatts). The redline is over 9,000 rpm, which must be a glorious sound to hear.