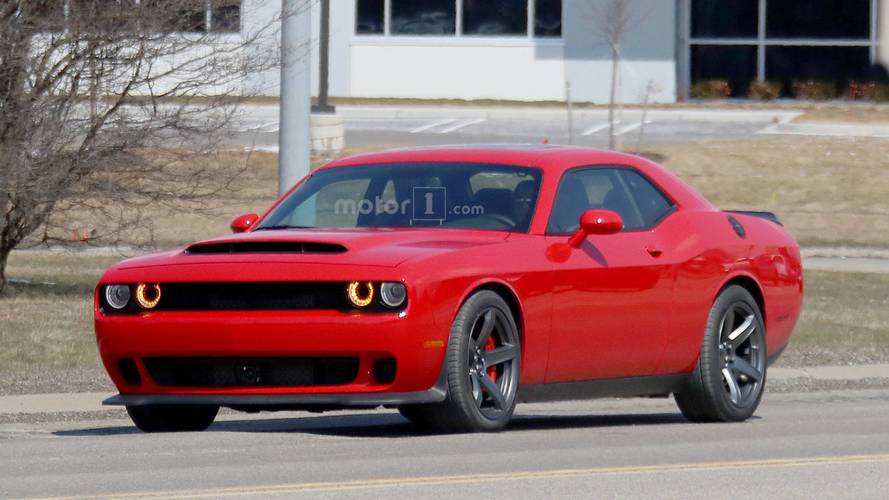 A discount in the best way possible.

Last year, Dodge unveiled the Challenger SRT Demon – an 840-horsepower creature from the depths of SRT’s engineering catacombs. Everything about the Demon screams drag strip. However, this isn’t something Dodge is building until the end of time. The automaker is manufacturing just 3,300 examples. After that, it’ll be gone – sort of. Dodge is prepping the Challenger SRT Hellcat Drag Pack for a debut later this year, which will receive a majority of the content offered by the Demon.

Spy photos prominently show the Demon’s Air Grabber hood on the narrow-body Challenger. The Drag Pack could receive as much as 75 percent of the awesome performance content found on the Demon – such as the TransBrake, Air-Chiller, and Nitto tires. However, while the Hellcat Drag Pack may come loaded with goodies, it will only produce 707 to 725 hp. That isn’t quite the same as the 808 hp offered from the 6.2-liter supercharged V8. The Hellcat Drag Pack could have a taller final drive ratio than standard Hellcat Challengers.

There’s also a rumor that in the Uconnect system there will be a “Drag Mode,” which hints there could be some customized settings to turn on when SRT Hellcat hits the drag strip. The Demon has several unique performance parts that help it make its massive amount of power and lightning-quick quarter-mile time, and the new mode could allow those parts to create the most power.

The Hellcat Drag Pack should debut by the end of the year as a 2019 model – possibly making an appearance at the Woodward Dream Cruise in August. Dodge making another special Hellcat makes sense. There’s about a $20,000 difference between the Demon and the Hellcat price that is ripe for a product. This is something Dodge already exploited with the Hellcat Widebody that offered several parts found on the Demon. The Drag Pack gives customers something new while riding the wave of hype the Demon created. Tack on a $10,000 premium over a standard Hellcat, and you should have a winner.