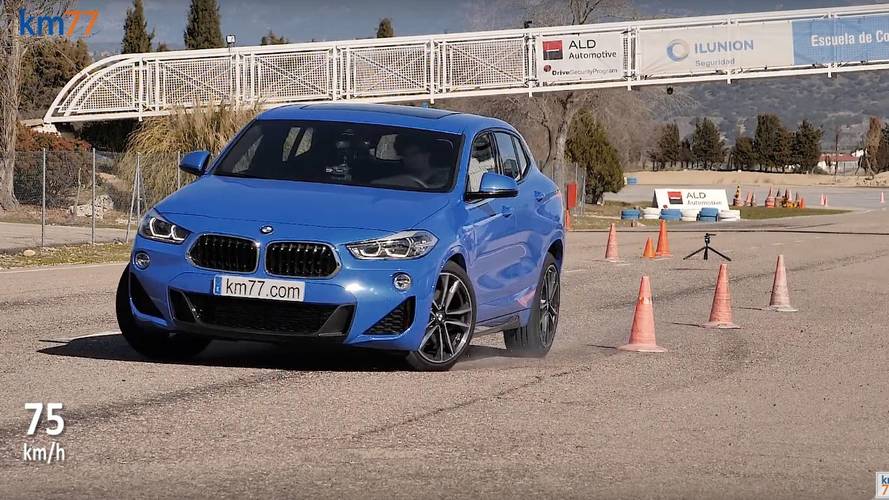 No actual moose were harmed.

For the uninitiated, the moose test is designed to test how well a car can evade a suddenly appearing obstacle. Think of a child running into the road, or a car backing up unexpectedly. At its core, it’s an evasive maneuver test. It’s a great indicator of well a driver can maintain control of a vehicle if he or she has to take evasive maneuvers to avoid, well, a moose. The track uses cones in an “S” shape to indicate the driver's lane and the oncoming lane. In two separate videos from km77.com, we see the Volvo XC40 and BMW X2 attempt to pass the test without killing too many cones.

The Volvo XC40 passes the test at varying speed with only taking out one cone. The first pass is a success at 73 kilometers per hour (45 miles per hour). You can see the crossover’s traction control working to keep the XC40 from sliding into the cones, which doesn’t upset the vehicle too much. Everything looks controlled and planted. When the driver ups the speed to 77 kph (48 mph), the crossover does begin to struggle a bit, but only one lone cone is damage. It’s still an impressive attempt.

How Does The BMW M5 Perform In The Moose Test With Worn Tires?
⠀

The other video shows the BMW X2, and this is where the dichotomy between the two crossovers’’ handling is easy to distinguish. The BMW’s first attempt at 73 kph (45 mph) is successful, without a cone knocked out of place, but the crossover is nowhere near as planted at the XC40. The X2 bucks and sways back and forth as it completes the test, clearly less controllable than the Volvo.

Things only get worse on the X2’s second attempt. At 75 kph (47mph), the BMW makes it through the first set of cones, but when it tries to correct itself back to its original track, it overshoots, taking out a cone and completely missing the final cone track. At 77 kph (48 mph), the BMW can’t even be corrected to the proper lane, blowing through the test in the driving down the oncoming lane.

The moose test is a great way to see how cars react in real-world scenarios. Being able to complete an evasive maneuver safely could be the difference between life and death, and in 2018 no two cars are the same.