This Porsche 917 May Not Look Road-Legal, But It Is 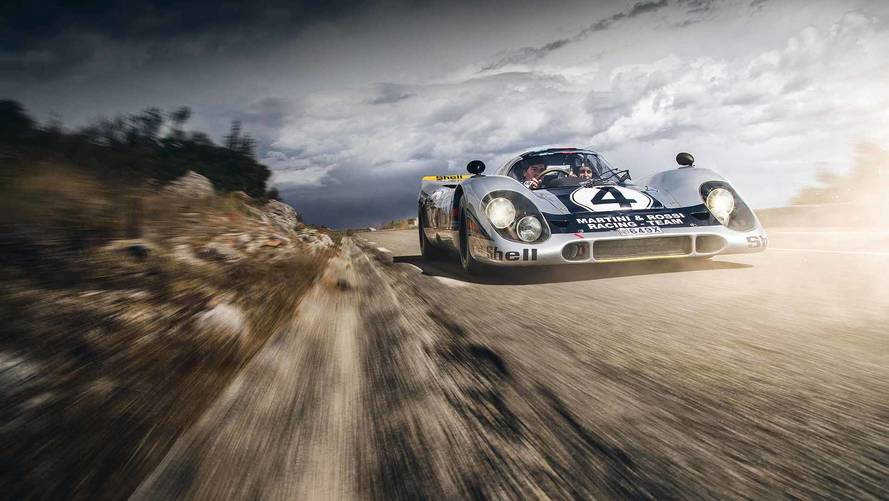 Who wouldn't want to experience an air-cooled flat-12 on public roads?

The Porsche 917 is one of the most important racecars of all time with achievements like bringing Porsche its first ever victory at the 24 Hours of Le Mans and having a starring role in the Steve McQueen film Le Mans. The company never intended anyone to use the 917 as a road car, though. Amateur racer Claudio Roddaro decided to make it happen by converting the iconic racer to be street legal.

An odd quirk in Porsche 917 history made this insane project possible. In the 1974, Count Rossi, part of the Martini & Rossi company that sponsored plenty of Porsche racecars, bought a used 917 from the company. With minor modifications like adding mufflers, he was somehow able to convince the DMV in Alabama to allow the car for road use, according to Historic Motorsport Central. He was then able to use that paperwork to make the vehicle legal for European street use.

Learn More About The Porsche 917:

Since there was precedent for a road-legal 917, Roddaro had to make identical changes to his car to make it acceptable to European authorities for use on the road. This process still wasn't easy, though, because, according to Porsche, Roddaro went through two months of wrangling with authorities before having all the necessary paperwork.

Like the famous racecar, this car still packs a 4.9-liter, air-cooled flat 12 that produces around 600 horsepower. The whole vehicle weighs just 1,323 pounds (600 kilograms). It's hard to imagine what this machine would be like to drive on Monaco's tight roads, let alone in a snarl of traffic.

Don't worry about Roddaro messing up an important Porsche in a fender bender because of his car's intriguing history. Porsche built this chassis as a spare but never actually raced it. In 2003, Gunnar Racing began the process of getting the vehicle ready for the track for the very first time. The company chronicled the extensive project online, and the model made its racing debut at the 2004 Rennsport Reunion.

According to a Porsche 917 chassis registry, Roddaro acquired this car in 2016 and has used it extensively on track including at the Monza Historics and Oldtimer GP at the Nürburgring.

Amid the bustle and hubbub of a popular Riviera restaurant, a baritone burble rises through the floor, vibrating up high, elegant heels and tapered table legs to resonate around the rims of thin-stemmed wine glasses.

Angry pops and crackles from the street outside are followed by a final ear-splitting bark that sees food spill from silver forks and a waiter, weaving through the startled diners, drop an unopened bottle of Biondi Santi onto unforgiving terracotta tiles.

Claudio Roddaro bought 917-037 in 2016
Or at least, this is how we like to think it plays out whenever Claudio Roddaro pops out for dinner. For this affable young amateur racer has realised the 24-carat fantasy harboured by most of us diehard Porsche fanatics, by not only owning a genuine 917, but by making it road-legal.

Monaco resident Claudio bought 917-037 in 2016. An avid collector, and driver, of rare Porsche racers, he immediately set about getting it registered for road use. Now this is not an easy thing to achieve with a 40-something Le Mans sports prototype. But, crucially, there was a precedent. In fact, there were two. A pair of genuine 917s had previously been road-registered, one, chassis number 917-021, a long time ago, and only briefly. The other the famous no. 030 car, owned almost from new by the late Count Rossi, the Italian nobleman who masterminded Martini’s famous sponsorship tie-in with Porsche. Via a highly suspect loophole, this all-silver, leather-trimmed Behemoth has remained road-legal ever since it was retired from racing duties in the early 1970s. And it was this car that would come to Claudio’s rescue.

In order to get his 917K approved for road use, Claudio had to prove that it was identical to the Rossi car. This was no easy feat, however. The unfinished 037 chassis was acquired by Germany coachbuilder Baur in the late 1970s and the car remained unbuilt for decades. It was eventually sold to a US collector who instigated its assembly in the hands of Carl Thompson at Gunnar Racing in Long Beach. In April 2004, more than thirty years after its life began, 917-037 made its rather overdue public debut at the Rennsport Reunion in Daytona.

917-037: the final build
Throughout its life, however, Porsche had remained aware of the car’s whereabouts and was able to furnish the owners with a chassis plate upon request, authenticating 037 as a genuine 917. This would make it the final build, and because it was made up of around 95 percent original Porsche parts, also the most original 917 in existence – an assertion helped enormously by the fact that it was never raced in period, and therefore never crashed.

Its 4.9-litre air-cooled flat-twelve engine was, and still is, good for in the region of 600bhp, serious stuff even among today’s lofty supercar hierarchy. But this is a car that weighs just 600kg, well under half the weight of a current 911 GT3. And that, of course, means achieving the hallowed 1000bhp/tonne. On the road. In a car almost half a century old.

Rumbling around the busy streets of Monte Carlo and hollering up the hillsides that fringe the French and Italian Rivieras, there are supercars and hypercars aplenty, the ubiquitous playthings of competitive playboys. But it’s nice to the think that, now, whenever the Claudio gets peckish, the competition is moot.