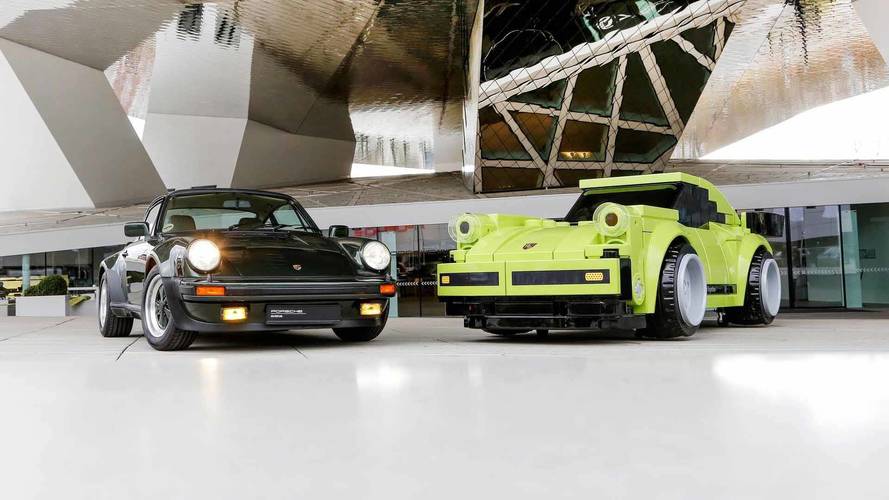 Don't expect to see Lego selling this 911 Turbo kit anytime soon. We'd love to see the box it comes in, though.

Building a life-sized car out of Lego bricks isn't a very original idea anymore after seeing so many of them, but Porsche finds a new spin on the concept by using gigantic blocks to build a recreation of the miniature model – not the real-world vehicle that they are are trying to depict. You need to get to Stuttgart quickly to see this weird Lego kit, though. It's on display at the entryway of the Porsche Museum until April 19 and then becomes an exhibit Porsche Tennis Grand Prix in Stuttgart from April 21 through 29.

This big, green Porsche takes its shape from the Lego Speed Champions kit that includes a modern Porsche 911 RSR racecar and late-1970s 911 Turbo 3.0 and retails for $29.99 in the United States. This huge example would likely be the star of any Lego fan's collection, if the company could ever figure out a way to sell it.

Finally, The Porsche 911 R We Can All Afford

Unfortunately, the company doesn't offer any explanation about what it takes to create such a bizarre automotive creation. We suspect the firm molded the pieces out of fiberglass and then bolted them together. Regardless of how the creators put this thing together, the result was quite impressive.

Porsche seems to have a penchant for building life-sized versions of its Lego models. For example, the company created a full-scale variant of its Porsche 911 GT3 RS kit. The vehicle even included seats and a steering wheel that would have actually fit a person, if the company let someone get in. The tinier version available for sale featured 2,704 pieces to assemble and a 600-page book, including the instructions.