Volkswagen Commercial Vehicles teased European pickup truck fans last year at the Frankfurt Motor Show with a more powerful version of the V6 Amarok. Painted in a striking Turmeric Yellow Metallic, the Aventura Exclusive concept (pictured at the end) now has a direct road-going correspondent in the shape of a new range-topping version of the posh workhorse. 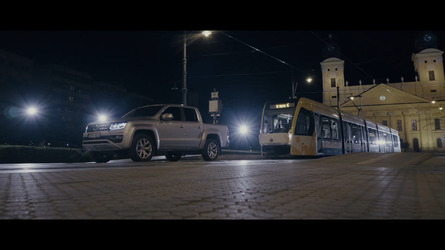 But wait, there’s more. An overboost function will temporarily increase the amount of available horsepower at the driver’s disposal by a further 13 hp for a grand total of 268 hp (200 kW). Needless to say, all that oomph is channeled to a 4Motion all-wheel-drive system through a standard eight-speed automatic transmission. The maximum torque kicks in at a low 1,400 rpm whereas the full horsepower is available from 3,250 rpm.

More about the Amarok:

Available for the Highline and Aventura models, the new crown jewel of the VW Amarok range also gets an assortment of visual upgrades. Titanium black accents have been used for the roof liner and the pillars, while the Nappa leather-wrapped seats inside have a similar look. High-gloss 20-inch wheels with a dark graphite finish are available, along with a striking metallic Peacock Green offered exclusively on the more expensive Aventura.

Rounding off the list of niceties are the standard bi-xenon headlights with LED daytime running lights, a body-colored sports bar, automatic headlights and wipers, cornering fog lights, and electric folding mirrors. These are standard on the Aventura and cost extra on the Highline.

The introduction of a beefier Amarok can be seen as VW’s response to the recently launched Mercedes X-Class in the X350d 4Matic guise. It’s worth mentioning the Nissan Navara-based luxury pickup truck is down on torque compared its adversary built in Hannover as the turbodiesel 3.0-liter V6 pushes out 406 lb-ft (550 Nm). Coincidentally, horsepower is the same, at 255 hp (190 kW).