Mercedes' biggest and most luxurious SUV is being overhauled for 2019.

The second-generation Mercedes GLS is getting a little bit long in the tooth considering it was launched in 2012, back when it was still called the GL. The good news is the fullsize premium SUV is going to be all-new for 2019 and we’re expecting to see it without the camouflage in the second half of this year. Meanwhile, there’s still a lot of testing that needs to be done in order iron out all the issues until the market launch. 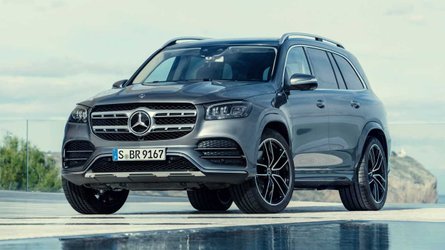 With spring finally arriving in Europe, it means the Nürburgring is now open for business. Lots of automakers are currently at the Green Hell where Mercedes has set up camp to evaluate its future models. The GLS is on the list of upcoming products and here we can see it fully disguised getting a drink before hitting the Nordschleife.

The current model lost a lot of weight when it switched to the second generation and it should be the same story with the third one as a result of using a more advanced platform that might come along with a bump in size. The hotter GLS 63 could arrive relatively early in the life cycle taking into account it has already been caught on camera multiple times trying to hide the Panamericana grille seen on a plethora of new AMG models.

There’s not much to say about the styling at the moment since the prototype not only had the usual swirly camo, but it actually carried extra plastic bits on its body to further conceal the real metal underneath. One thing is for sure, the GLS looks absolutely massive and imposing – just look at the sheer size of the quarter glass. Never mind the simple taillights since those are temporary, but the headlights are the final clusters you’ll see on the production model.

We could get a first taste of the 2019 GLS as early as April 25 at the Beijing Motor Show where Mercedes will unveil an ultra-luxurious concept. Teased earlier this week, the showcar is believed to be a high-end SUV based on the GLS and set to be launched under the Mercedes-Maybach sub-brand.