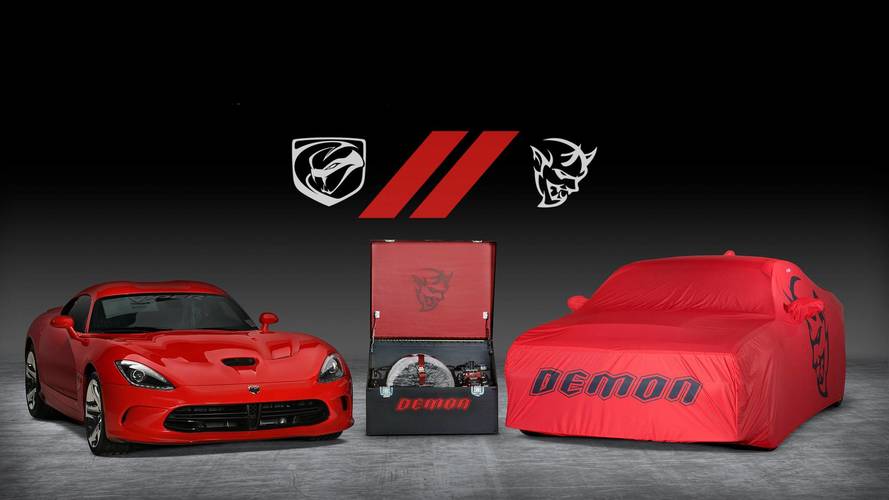 [UPDATE, June 26] The very last Dodge Viper and Dodge Challenger SRT Demon have managed to fetch a combined $1 million at the Barrett-Jackson Northeast Auction in Connecticut.

If you've missed out on owning a Dodge Viper or Challenger Demon, you’ll have a chance to own two exceptional examples this June – if your pocketbook is deep enough. Later this year at the Barrett-Jackson auction in Uncasville, Connecticut, Dodge will auction the final two models of each. However, if you wanted just one not the other, you’re out of luck. Dodge will sell the two as a pair. That’s 1,485-combined horsepower for your garage. Dodge is calling the auction “The Ultimate Last Chance.” Last chance to remortgage the house, maybe.

Check Out These Machines For Sale:

"An avid collector could search a lifetime to try to put two vehicles of this pedigree together and never find it, it's that elusive," said Steve Beahm, Head of Passenger Car Brands, Dodge/SRT, Chrysler, and Fiat – FCA North America. "Pairing the last Dodge Challenger SRT Demon and the Dodge Viper production cars – two of America's most sought-after vehicles – under the roof of Barrett-Jackson gives someone the 'last' chance to own this unique piece of automotive history, and Dodge//SRT the opportunity to raise money for a cause close to our hearts."

The final 2018 Dodge Challenger SRT Demon packs a supercharged 6.2-liter V8 engine under the hood that produces 840 horsepower and 770 pound-feet of torque. The Demon, the last of the 3,300 Dodge will ever build, wears the Viper Red exterior color. Along with the massive amount of horsepower, the final Demon comes with the front passenger seat, trunk carpet kit, custom Demon car cover, build sheet, and Demon Crate, which is full of additional parts such as the front-runner drag wheels, replacements powertrain control module, and Demon-branded track tools.

Sending the final 2017 Dodge Viper to auction for charity is probably the noblest way to say goodbye to the legendary supercar after 25 years. The Viper has a 645-hp, 8.4-liter V10 under its long hood, sending power to the massive, 14-inch wide rear tires. The iconic side-exit exhaust and carbon-fiber body are just a few of the unique touches. Other goodies include exterior carbon-fiber accents, black Alcantara leather seats, and exclusive authentication kit. The Viper, too, wears Viper Red exterior paint.

How much will someone spend for the pair? Well, considering the 2015 Dodge Challenger SRT Hellcat VIN0001 raised $1.65 million for charity in 2014, expect this pair to go for a healthy seven figures. The auction takes place June 20-23.

June 25, 2018 , Auburn Hills, Mich. - It was the type of offering that makes bidders and fans stop and pay attention: the last of two record-setting performance legends – the final 840-horsepower 2018 Dodge Challenger SRT Demon and the final 645-horsepower 2017 Dodge Viper – sold as a pair at the Barrett-Jackson Northeast Auction at Mohegan Sun in Connecticut on Saturday, June 23.

The bidding was spirited, befitting the combined 1,485 horsepower of the cars on the stage. When the hammer dropped to end the “The Ultimate Last Chance” auction, the top bidder became the new owner of the Dodge Viper and Dodge Challenger SRT Demon, and the United Way was the winner, receiving 100 percent of the hammer price. The final price ranked as the highest during the four-day Barrett-Jackson auction.

“We know the power of the Dodge Viper and Dodge Challenger SRT Demon to put a smile on people’s faces; we’re smiling today because we know the power of this donation to the United Way,” said Steve Beahm, Head of Passenger Car Brands, Dodge//SRT, Chrysler and FIAT – FCA North America. “These particular vehicles mark the end of their eras as the last vehicles of their kind to be built; it’s rare to have just one such vehicle cross the auction block, much less a pair at the same time.”

“We are honored that Dodge chose Barrett-Jackson for this historic sale of the last production Viper and Demon,” said Craig Jackson, chairman and CEO of Barrett-Jackson. “We’ve been fortunate to have many incredible moments on the auction block for charity sales over the years and this was another one. The winner is taking home two spectacular and historically significant vehicles, and we can’t thank Dodge enough for bringing this special moment to our Northeast Auction at Mohegan Sun.”

Both cars wear the same Viper Red color (production code LRN) that was part of the Viper color palette. The auctioned Dodge Challenger SRT Demon was hand-painted to match after it left the Brampton Assembly Plant in Ontario, Canada.