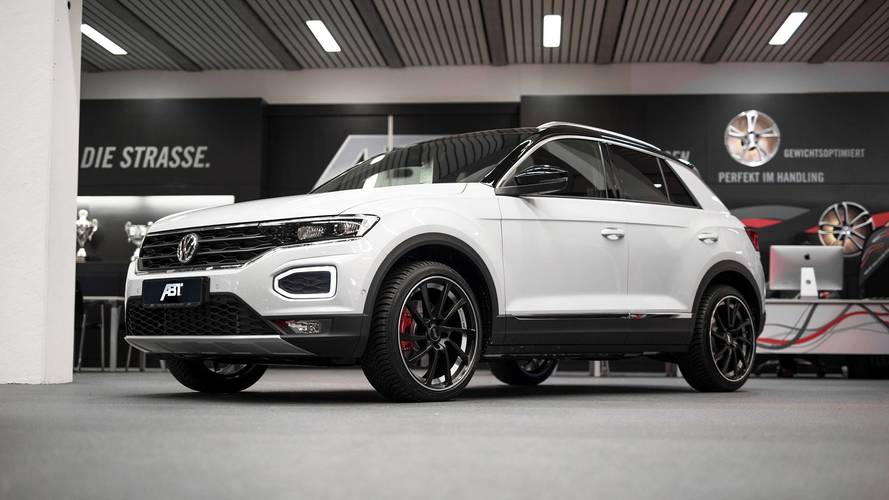 A little tune never hurt anyone.

ABT, the German aftermarket tuning company, is known for taking luxury cars to the extreme. Whether it’s lowering the Audi SQ5 to the point that it’s a virtually a hatchback or giving the RS5 supercar performance, subtly isn’t its forte. At least, not usually. The newest tuned creation from ABT is the Volkswagen T-Roc crossover, and while it doesn’t get supercar performance, it does get a pump in power along with some visual upgrades.

No ABT tune would complete without increasing power. While the T-Roc gets a modest bump, an increase is an increase. The ABT Engine Control Unit takes the T-Roc’s 190-horsepower 2.0-liter engine and increases power by 20 percent, producing 220 hp. Torque increase to 266 pound-feet, up from 236 lb-ft.

Underneath, there are ABT suspension springs, lowering the T-Roc by 1.3 inches in the front and 1.6 inches in the rear, giving the all-wheel-drive crossover a more aggressive stance. Along with the lowered suspension comes ABT alloy wheels ranging from 18 to 20 inches and include several designs and color options.

Will there be a more powerful version of the T-Roc from ABT? Doubtful. The VW isn’t a powerhouse to begin with, nor is it designed to be like those other ABT-tuned crossovers. But that’s okay.

No, this isn’t a VW making 600 horsepower, but it doesn’t have to be such a vehicle. Not everything tuned by ABT has to be insane. Sometimes you only need a bump in power, a slightly lowered suspension, and some new wheels to make it stand out from the crowd. The ABT Volkswagen T-Roc isn’t going to tear it up at the race track, but it could draw some jealous eyes in the grocery store parking lot.

The VW T-Roc may be compact, but its attention factor is huge. The name itself is full of self-confidence and the style is no less courageous than in the Geneva study from which the SUV originates. Visually, the vehicle looks as if it could jump into a desert rally at any time. There is certainly no shortage of horsepower – particularly with the powerful 190 HP (140 kW) two-liter gasoline engine. And this is still not the end of the story. The ABT Engine Control(AEC) unit developed by ABT Sportslineenables the four-cylinder engine to develop 228 HP (168 kW), giving the T-Roc 20 percent more power. The maximum torque is increased to 360 Nm, even challenging diesel engines in terms of engine power in the low rpm range.

The world's largest tuner for vehicles from the VW and Audi group has even more to offer for the dynamically designed SUV. While ABT Power delivers the "thrust", ABT Suspension Springs provide the necessary control. With the standard all-wheel drive, lowering the front and rear ends by 35 to 40 mm makes the T-Roc as stable as a rock on the road – but much more dynamic.

The T-Roc’s design may seem angular – but it's completely well-rounded, easy to handle, practical and well designed. Just like the alloy wheels from ABT Sportsline. The German company has three attractive designs ranging between 18 and 20 inches in stock. The DR, FR, and ER-C differ not only in design, but also in color. The latter rim is even available in two versions. Rockin', isn’t it?