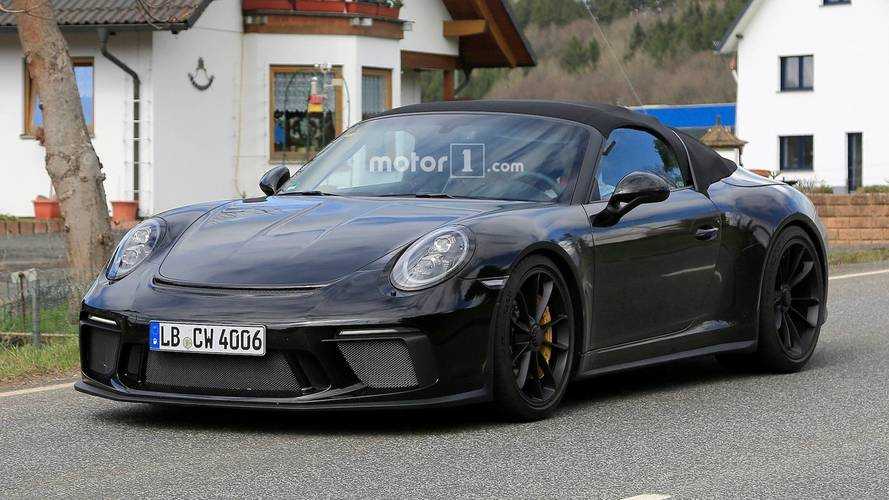 The special edition 911 should make its debut by the end of the year.

As Porsche continues to develop its all-new 911 – scheduled for a debut sometime late in 2019 – the German marque is planning one final hurrah of its current generation. Following special series models like the R and Turbo S Exclusive models before it, the Speedster will soon join the 911 lineup, complete with a handful of new visual upgrades over the standard cabrio.

For one, it will feature a unique roof mechanism. New spy photos show the Speedster prototype with camouflage over the rear portion of the cloth top, which will expectedly be chopped and angled differently to give the 911 a more appealing profile with the roof down. It will be the same approach Porsche used on previous Speedsters models, including the most recent one in 2011.

Other added design cues will include new fenders – likely borrowed from the Carrera 4 – some new wheels, and undoubtedly a few added "Speedster" emblems located throughout the cabin and on the exterior. Like the most recent version, this one will be limited. Just 356 examples of the 2011 Speedster were built, so expect production numbers for the new model to be around the same.

Unfortunately for speed freaks, power from the GTS on which it’s based likely won’t be improved. The same 3.0-liter biturbo flat-six will carry over, producing 450 horsepower (331 kilowatts) and 405 pound-feet (550 Newton-meters) of torque, which should give it a similar 0-62 (100 kmh) time of 3.8 seconds, and a top speed somewhere in the neighborhood of 191 mph (308 kmh).

The new Porsche Speedster will likely be shown before the end of the year; the L.A. Auto Show would make an ideal location for a debut. The standard GTS cabrio starts at $133,000 in the U.S., so expect the Speedster to be significantly more expensive given its limited run and unique visual cues.