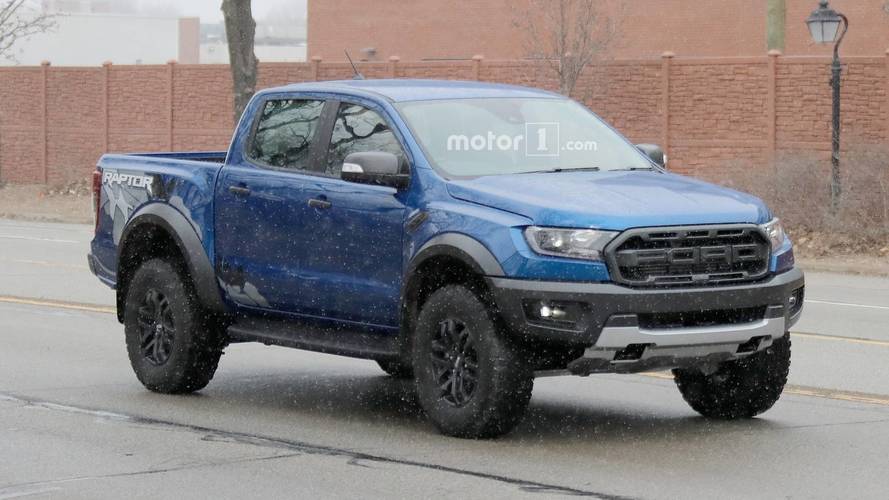 We've got our fingers crossed for an American version of the performance pickup.

We’ve already seen the new Ford Ranger Raptor in the sheet metal; the performance pickup made its debut this past February in Thailand. But a new set of spy photos captured the midsize pickup on public streets just outside of Ford headquarters in Dearborn, Michigan – which is interesting for a number of reasons.

For one, Ford hasn’t confirmed when Americans buyers will be able to get their hands on one, if at all. Since the regular Ranger is making its way to the U.S., though, most are guessing that Ford will bring the more-powerful model over, too. Seeing it stateside gives weight to suspicions of a U.S.-bound Ranger Raptor.

The second interesting thing to note is the new graphics package, stretching from the rear door to the tailgate. The Raptor logo, with some black, white, and grey graphics are brand new, and could signify either of an optional package for markets like Australia and Thailand where the truck will be marketed heavily, or – fingers crossed – an American spec package. For what it’s worth, this prototype is right-hand drive, so it was likely imported from Australia.

The photographer also noted a distinct diesel sound under the hood, undoubtedly the same 2.0-liter turbodiesel introduced on the global model, producing 210 horsepower (157 kilowatts) and a hefty 369 pound-feet (500 Newton-meters) of torque. If the Blue Oval does confirm the Ranger Raptor for America, here’s hoping that same engine finds its way under the hood.

Until we get an official word from Ford, we’ll have to continue to wait. The standard Ranger is making its comeback for the 2019 model year, so we should see the production version hitting the street in just a few months. If confirmed, the Ranger Raptor should make its debut in the U.S. sometime in 2019 for the 2020 model year. Time will tell if it will be available with the same diesel engine on the global model, or an EcoBoost gasoline unit.