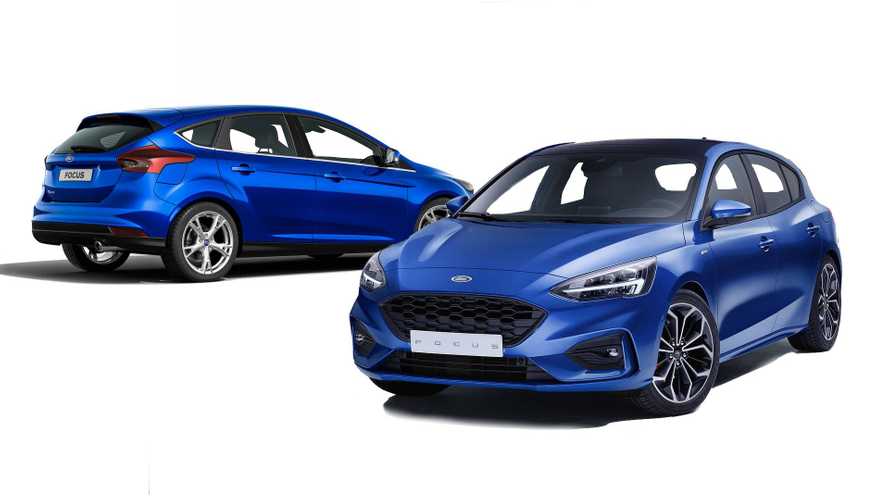 With a sleek new exterior and a tech-focused cabin, the 2019 Focus is a big improvement over the previous model.

The new Ford Focus is finally here. Completely revamped and remodeled for the 2019 model year, the handsome hatchback was uncovered in Germany, showing off its sleeker, stretched body, upscale new face, and modern interior. Though it will still be some time before we see it on sale in the U.S. – Ford says that we’ll begin getting shipments from China during the second half of 2019 – there’s still a lot to look forward to on Ford’s latest hatchback. Here’s how it stacks up against the outgoing model in terms of design.

Hide the Blue Oval badge, and you might not even know that this was the new Focus at all. The 2019 model is far sleeker than the outgoing version, with upscale new headlights, a larger, more distinctive grille, and depending on the trim, large fog lights and LED running strips.

With four different variants to choose from, including Titanium, Vignale, ST-Line, and Active, the Focus features a number of unique styling elements at each. The ST-Line, for example, adapts a more sculpted fascia with aggressive cues, in line with Ford’s performance-oriented ST models. The Vignale and Titanium trims, meanwhile, are more upscale, each with plenty of chrome treatment and unique fog light elements. The Active model gains a slightly taller ride height, and plastic cladding around the bumpers. The sedan is also brand new.

The side profile of the new Ford Focus is arguably its most enticing angle. Not only does the hatchback look longer and sleeker – it actually is. The wheelbase stretches out an extra two inches (53 millimeters) over the outgoing model, and with a drag coefficient of 0.273 for the hatchback, that represents a best-in-class figure. The result is a hatchback that looks stout and aggressive from the side, especially when wearing the sporty ST-Line guise.

The same can be said about the rear styling as the front – if you hadn’t already known this was the Focus, you might not be able to tell at first glance. The taillights are brand new, with LED fixtures available depending on the trim. The sharp new styling of the taillights gives way to a sculpted rear with a diffuser that’s lower and less noticeable on the Vignale and Titanium trims, but more aggressive on the ST-Line. The "Focus" nameplate now stretches across the tailgate directly underneath the Ford badge throughout the range.

Ford hasn’t skimped on redesigning the cabin, either. The Focus now gains a tablet-style infotainment screen that juts out from atop the dash, replacing the smaller embedded unit found on the previous model. The addition of the new screen declutters the previous design significantly, separating the radio and volume controls from the A/C settings with two large air vents. Also, the Focus gains a rotary-style gear selector for the first time in the automatic version.