2019 BMW 8 Series Coupe And Convertible Spied Inside And Out 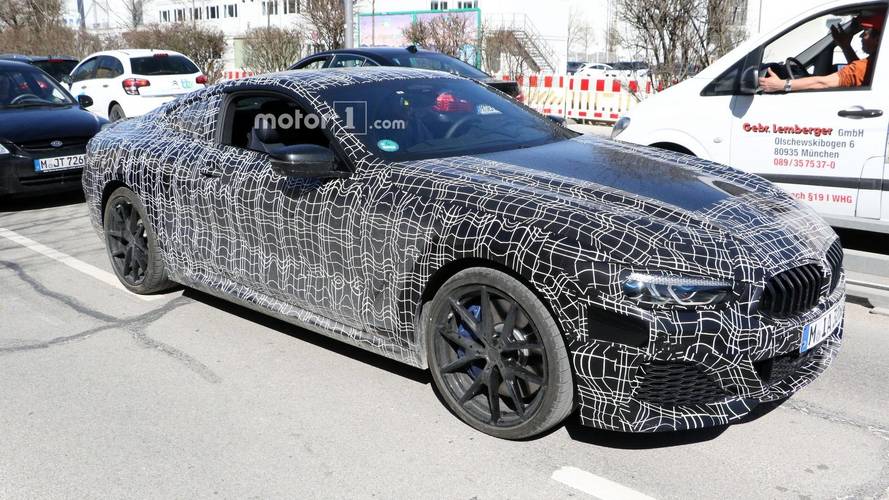 The large front air intakes, blue brake calipers, and fat exhaust tips are all signs of an amped-up version.

As we are approaching the highly anticipated reveal of the reborn BMW 8 Series, there’s certainly no shortage of spy shots showing the lavish coupe and its equally fancy cabriolet sibling roaming the streets with camo attire. Our latest batch is depicting both body styles in an M-flavored specification, either a regular version fitted with the optional M Sport Package or a high-end M Performance derivative slotting underneath the M8.

These BMW vehicles appear to have the full production bodies with vents not only at the front and rear bumpers, but also on the sides of the front fenders. The white cabrio prototype was riding on 19-inch wheels still stuck on winter tires whereas the black coupe had another set of alloys with an all-black look and different rubbers. In both instances, the cars featured blue brake calipers, which is usually a sign of M goodness.

Beyond the obvious changes to the roof, there’s another visible modification from the coupe to the cabrio as the former features a subtle trunk lid spoiler whereas the latter has a bulge to contain the third brake light. It’s worth mentioning that the convertible appears to feature an extra layer of camouflage at the back to better conceal the real metal.

Speaking of the rear, the two prototypes had fat exhaust finishers containing the real exhaust tips, two on each side. Again, this is a sign of a hotter version, and we might actually be looking at an M850i of some sort. In a couple of the attached images we can also have a peek inside the cabin, which although largely masked, the all-digital instrument cluster is visible, along with a small section of the center console.

Shown behind closed doors last month at the Geneva Motor Show as a production model, the BMW 8 Series will officially debut this year and it will bring along its M8 companion. As a refresher, most of the final interior and exterior styling emerged onto the web a couple of months ago, so there’s not much of a secrecy regarding the car’s appearance.

Besides the two-door models, the 8 Series family will eventually grow to include a four-door Gran Coupe and that one too will get the M treatment as hinted by a stunning concept exhibited last month in Geneva. These three cars will effectively replace the equivalent 6 Series models.