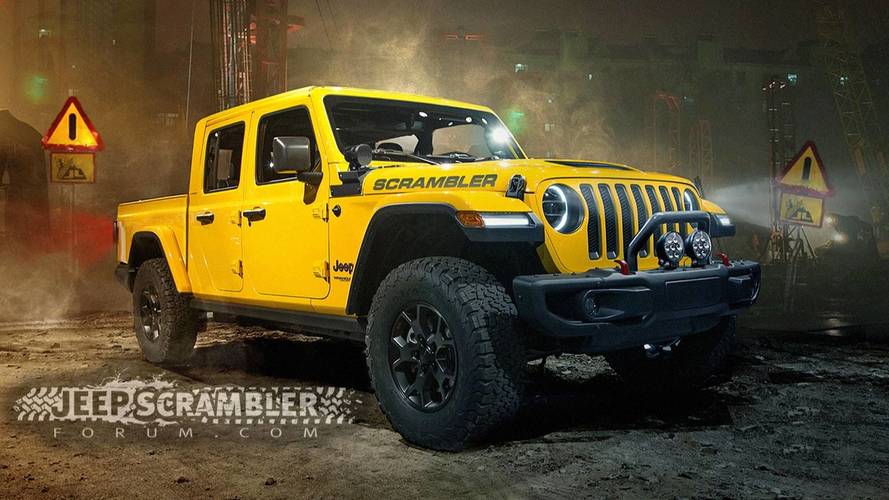 With the new Wrangler already released, Jeep fans are patiently awaiting the revival of the iconic Scrambler nameplate in 2019. The badge will adorn the backside of a Wrangler-based pickup for the first time in more than a decade, and though we’ve yet to see the final product in the flesh – apart from spy photos – this new rendering gives us an idea of what to expect.

Rendered by a user on the JeepScramblerForum, the concept looks ready for the road. Like many other renderings before it – including our own – the vehicle uses the new JL Jeep Wrangler as its base, and tacks a usable bed on top of the already capable body. Features like the front fascia, wheels, headlights, and fog lamps carry over from the standard Jeep.

The backside, too, looks ready for the production line. The hourglass-shaped taillights from the standard Wrangler carry over, but most of the other components have been dropped in place of the bed. The rendering shows both the Scrambler nameplate and the Jeep logo stamped into the rear tailgate.

Not only will the new Jeep Scrambler share a number of visual components with the Wrangler, but it should be just as capable, and just as powerful, too. The pickup should come with the same 2.0-liter turbocharged four-cylinder found on the Wrangler, as well as the entry-level 3.6-liter V6. Rumors suggest a 3.0-liter turbodiesel V6 could also join the range, as well as a plug-in variant later down the line.

All that power will be managed via either a six-speed manual, or an eight-speed automatic. All-wheel-drive will come standard, of course, and a Rubicon variant with even more capability and features like locking differentials and a sway bar disconnect could also be possible. We should know more details when the Wrangler debuts in 2019.