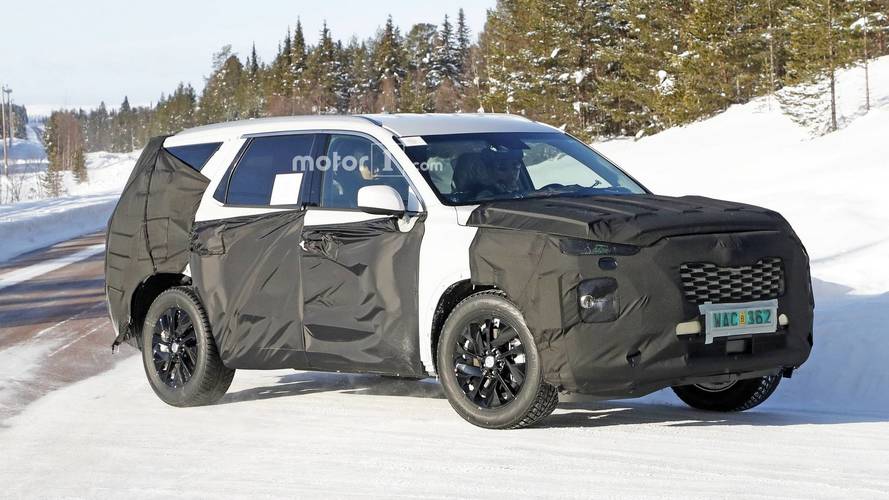 Trademark filing suggests it could be called Palisade.

Looking large and in charge, Hyundai’s biggest SUV has been caught once again during the final rounds of winter testing. Not shy to show off its imposing corporate “cascading grille,” the three-row prototype made those 18-inch black wheels shod in Nokian winter tires look very small because of the body’s sheer size. The production version will address this issue as it will certainly be offered with bigger alloys.

While at a first glance you might think the test vehicle only had those black pieces of fabric serving as camouflage, look closer and you will notice an extra layer of disguise on the C-pillar. The add-on piece is held in place using rivets and we’re also seeing something similar on the wheel arches. There’s also something odd going on with the side skirts as these appear to be incomplete, which is usually a sign the prototype is in the early phases of testing.

The thin upper headlights and the chunkier square lower lights indicate Hyundai’s biggest SUV will borrow styling cues from the recently unveiled 2019 Santa Fe. The side profile also resembles that of the smaller SUV, but the quarter glass appears to be bigger as a result of an enlarged rear end to accommodate those extra passengers.

Don’t expect to see Hyundai’s flagship SUV anytime soon as an official debut is unlikely to occur this year. Meanwhile, a seven-seat Santa Fe XL due in 2019 will temporarily serve as the company’s biggest high-riding offering. When it will eventually arrive, the even larger model could bear the “Palisade” moniker if a recent trademark filing has anything to do with the eight-seat SUV.

Logic tells us the model will be blessed with the firm’s most powerful engines currently available as it will need a lot of punch to move so much metal. As such, expect the biturbo 3.3-liter V6 mill to find its way underneath that massive hood with up to the 365 horsepower, if it will match the output available in the Genesis G80 and G90 luxury models.

As a final note, sister company Kia is also working on a bigger SUV, one that will slot above the Sorento and could ride on the same rear-wheel-drive platform as the new K900. It has been spied multiple times already and is expected to be named “Telluride” after a namesake concept.