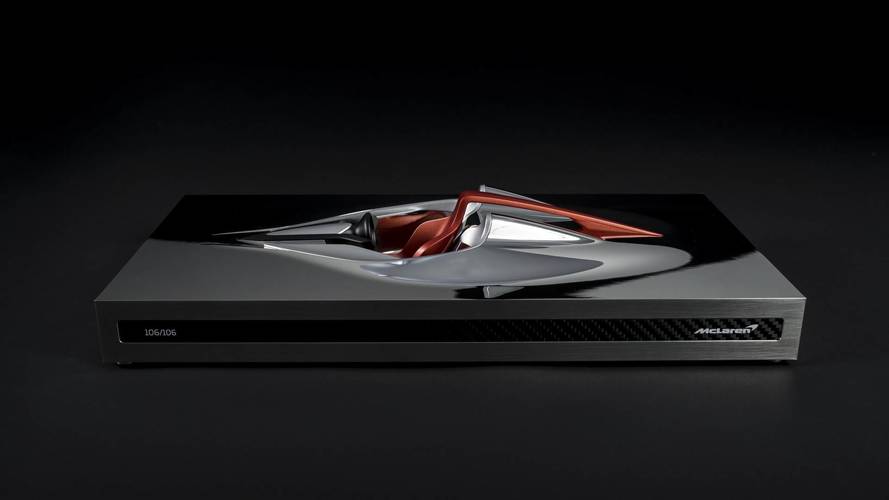 Buy a multi-million-dollar hypercar, get a sculpture free.

What you see in the attached photo gallery is not just a sculpture, but a “money-can’t-buy” statue that will be given to all future 106 owners of McLaren’s upcoming hypercar. Not only that, but the sculpture actually gives us a very distant preview of the exterior and interior design of the project currently known as the BP23.

More about the BP23 hypercar:

The BP23 Speed Form, which of course, won’t be available to buy from regular customers, weighs 7.9 pounds (3.6 kilograms) and measures 15.7 x 8 x 3.1 inches (400 x 205 x 80 millimeters). Each of the 106 examples is created using the latest five-axis CNC cutting technology, but the final assembly is made by hand for “extreme craftsmanship.” It took McLaren more than 100 hours to build each sculpture, 30 of which alone are dedicated to expert hand-polishing. At the end, a craftsman checks each sculpture to achieve “an exceptional standard of build, and the highest quality possible.”

As for the three-seat successor of the legendary F1, McLaren says all 106 examples have already been spoken for. Other than that, the British manufacturer is not yet willing to disclose any major details, but confirmed it will be fastest production McLaren to date with a top speed of 243 miles per hour (391 kilometers per hour) and also the most aerodynamic car ever from the marque.

The hypercar, also a successor of the P1, will use hybrid power and would ship to customers in 2019. Logic tells us it should be more powerful than the P1, which has a combined output of 902 horsepower (686 kW) and could accelerate to 62 mph (100 kph) in just 2.8 seconds.

McLaren is currently working on its ambitious plan to develop 15 new cars or derivatives by the end of 2022. The Track22 strategy requires a massive investment of £1 billion (or about $1.4 billion at today’s exchange rates) into research and development.

Future owners of the still-to-be unveiled McLaren Hyper-GT, codenamed BP23, will this week receive a sculpture of the car’s evocative and luxurious yet sporting interior. The BP23 ‘Speed Form’ also features a hint of the bodywork design that will make the next Ultimate Series McLaren the most aerodynamic car ever from the marque and help it to achieve the highest top speed of any McLaren, at more than 243mph.

The BP23 ‘Speed Form’ provides an early hint of the luxury and imagination that extends under the skin of the vehicle to its icon-eclipsing interior, which is arranged in the same three-seat, central driving position layout as the McLaren F1 that inspired it. As befits a gift associated with such a rare car, examples of the BP23 Speed Form – which are individually numbered – will not be available to buy.

This three-dimensional piece of art, which measures 400mm x 205mm x 80mm and weighs a proud 3.6kg, is a product of ‘extreme craftsmanship’, created in the true spirit of leading-edge McLaren automotive design. Each piece is machined using the latest 5-axis CNC cutting technology but hand-assembled and finished, reliant on the interaction of human hands, eyes and skills for the achievement of excellence.

Each McLaren BP23 ‘Speed Form’ took more than 100 hours to create, with 30 hours of expert hand-polishing alone. A craftsman has checked each sculpture to achieve an exceptional standard of build, and the highest quality possible.

The entire BP23 allocation of 106 – the same volume as the number of McLaren F1’s sold – was spoken for within weeks of the petrol-electric hybrid car being announced. Unlike McLaren Sports Series and Super Series cars, which have an alphanumerical nomenclature, BP23 will carry an as-yet unannounced name that will be disclosed nearer to its reveal.