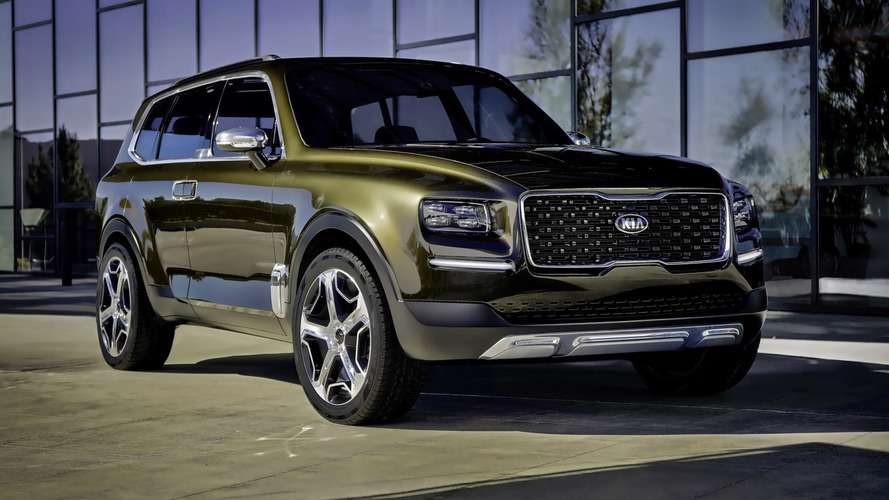 It’s a known fact by now that Kia is working on a bigger SUV to slot above the Sorento as per an official announcement was made at the beginning of the year. Previewed at the 2016 North American International Auto Show by the Telluride concept, the fullsize SUV with seven seats was spotted at the end of February testing in prototype guise while carrying a substantial amount of camouflage.

Fast forward to present day, Kia hints the three-row SUV will have quite a few things in common with the company’s brand new flagship – the second-generation K900 unveiled last week at the New York Auto Show. Speaking with Motor Authority, product planner for the U.S. market, Orth Hedrick, revealed a K900-based SUV represents a “natural thing” as the “components are there.” While he didn’t specifically say the Telluride will be based on the new rear-wheel-drive large sedan, he did mention “all the rolling stock is there.”

It seems highly unlikely he was referring to another SUV different than the Telluride, which Hedrick suggested it will be less fancy than a Genesis-branded SUV. Speaking of Genesis, parent company Hyundai is also cooking up its own large high-riding model and it might be called “Palisade” based on a recent trademark application. It has already been caught on camera and is expected to arrive in the years to come with up to eight seats.

Getting back to Kia, Hedrick was asked why the K900 was given a new chance in the United States where sales of the previous generation were quite low. His response was that Kia is “not a one and done kind of company,” adding the big sedan’s platform can be used for other models. Kia’s crown jewel of the range is programmed to go on sale in the U.S. during the fourth quarter of the year and will be built at the company’s Sohari plant in South Korea alongside the brand’s hottest model right now, the Stinger.