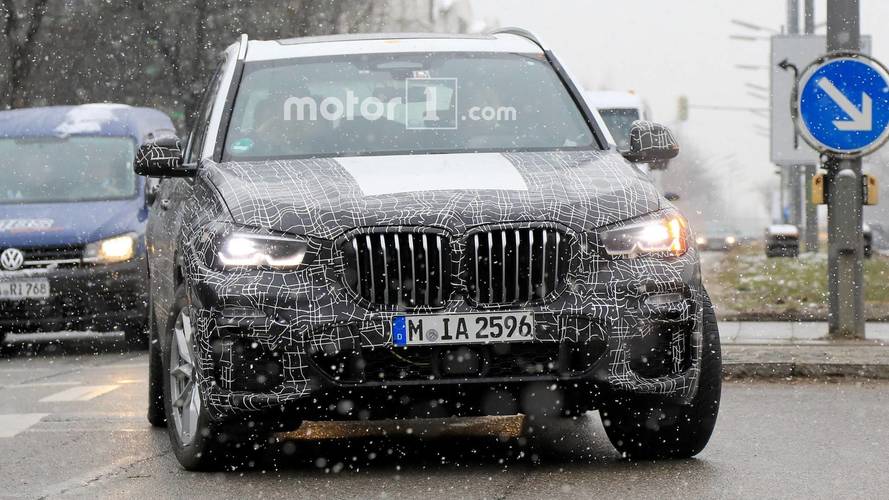 The CLAR-based SUV should debut this summer.

BMW is currently in the midst of an ambitious project to refresh its entire SUV lineup by introducing new generations of the existing models and adding brand new ones. The new X1, X2, X3, and X4 are already on the market, and now it’s time for the larger X5 to undergo a complete overhaul. Seen here is a prototype of the model, spied testing during the final stages of development somewhere in Germany.

Take a look at the front. Do you see it? The radiator grille – it’s gigantic! With every new generation, the X5 keeps getting more and more pronounced kidney grilles, but we have to admit they look good on this prototype. That’s probably true because the LED headlights also appear to be slightly bigger, while the air intakes in the bumper are now more aggressively-shaped.

At the back, the camouflage makes the taillights look like the Peugeot 3008/5008 duo, but in the final production form they’ll have nothing in common with the French SUVs. BMW will use a single large cluster at each side with LED technology and a distinctive light signature.

Other than that, the new X5 will keep its overall size and shape almost unchanged despite the new CLAR architecture. Expect to see only a minor bump in the dimensions which, combined with the new underpinnings, should result in considerably more room in the cabin.

On the engine front, don’t look for drastic changes in the lineup, as the current turbo gasoline and diesel engines will carry over, but will be tweaked to deliver better fuel economy and slightly more power. A plug-in hybrid version is also in the cards, as is a range-topping X5 M with a 4.4-liter biturbo V8.

On the same platform BMW will also develop the larger X7 with three rows of seat. There are also rumors for an even more opulent X8, but nothing is confirmed at the moment.