Trans Am Super Duty Converted For Drag-Racing Duty With 1,100 HP 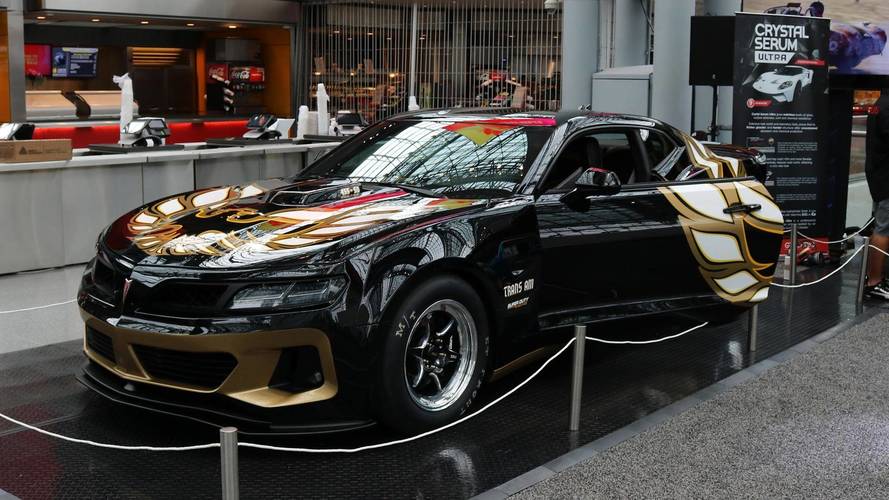 It can allegedly run the quarter mile in roughly 8.7 seconds.

Trans Am Worldwide has managed to unlock even more power from its Firebird-inspired Super Duty for a new drag racing package that makes a public appearance at this year's New York Auto Show. Now boasting over 1,100 horsepower (820 kilowatts) and potentially capable of an 8.7-second quarter-mile time, according to Motor Trend.

Gallery: 2017 Trans Am and Trans Am Super Duty by Trans Am Worldwide

The firm debuted its Trans Am Super Duty at the New York Auto Show last year (see it in the gallery above). Using a Chevrolet Camaro as the donor vehicle, Trans Am Worldwide installed a supercharged 7.5-liter (455-cubic-inch) V8 making 1,000 hp (746 kW) and 1,046 pound-feet (1,418 Newton-meters) of torque. To keep weight down, the company fitted carbon fiber replacements panels for the  fenders, hood, front and rear fascia, and trunk lid. In a nod to the past, T-tops were an option, too.

For the version at the New York Auto Show this year, Trans Am Worldwide worked with a client to create a drag racing version of the Trans Am Super Duty. It now runs on racing gas and features and methanol injection, which boosts the output. According to Motor Trend, more power isn't really possible because the eight-speed automatic gearbox can't take any more. Inside, there's a roll cage and five-point harness.

Trans Am Worldwide will now make the drag package a factory option, and they'll run around $190,000, according to Motor Trend.

If you're looking to spend a little less, then Trans Am Worldwide offers the less expensive, although slower, Outlaw Edition Trans Am. It uses a 6.2-liter supercharged V8 with 602 hp (449 kW) and 625 lb-ft (841 Nm). The output isn't nearly as high, but the model still provides the Smokey and the Bandit aesthetic that many buyers are probably looking for.