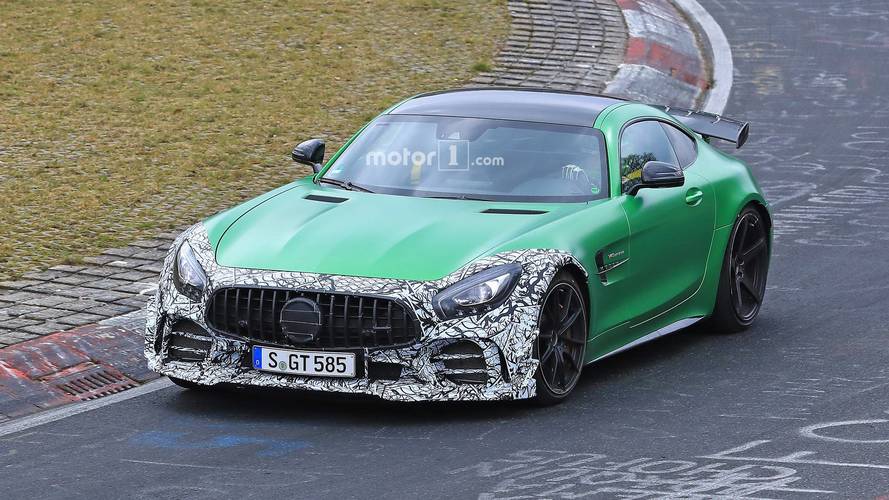 Black Series won't be out until 2020, so this must be something else.

The 2018 New York Auto Show may be in full swing, but it’s also a busy week at the Nürburgring where lots of automakers are currently testing future products. After seeing the M8 Coupe and Convertible, time has come to have a look at a prototype belonging to Mercedes-AMG. It’s none other than the “Beast of the Green Hell,” the hardcore GT R supercar caught tackling the demanding Nordschleife.

While at first you would be tempted to say that it’s virtually the same as the current GT R, look closer and you will notice the front bumper is now hosting a pair of canards to further boost aero of an already sleek machine. In addition, the central section of the bumper, right underneath where you’d find the big three-pointed star, has gone through some discreet updates as well. The tweaks likely serve the same purpose.

Other than that, the Mercedes prototype appears to be virtually the same as the GT R we’re all familiar with, although the big rear wing seems to have several small pieces of black tape. One can assume the supercar is either getting a mild facelift or some sort of an optional aero pack, with the prototype likely lacking some of the new goodies you’ll find on the final car.

While AMG boss Tobias Moers has confirmed the return of the Black Series badge, it won’t happen until towards the end of the GT’s life cycle. The plan is to have the hardcore coupe on sale in 2020, so what we’re seeing here is likely something else. Meanwhile, the updated GT R is rumored to debut before the end of the year and could receive a power boost over the 577 hp available today. We won’t be too surprised if the most powerful F1 Safety Car ever made will joined by upgraded versions of base, S, and C models, which currently have 469, 515, and 550 hp, respectively.