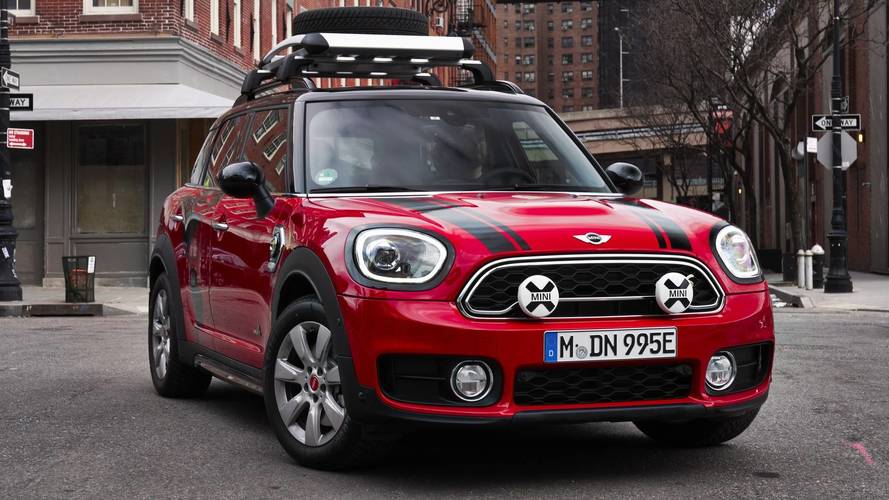 Mini’s first-ever plug-in hybrid production vehicle aims to demonstrate electro mobility is the future by embarking upon an exciting adventure on the world's longest north-south road link. The weapon of choice is the Cooper SE Countryman All4, but not the standard version as the vehicle has gone through a few minor changes to make it ready for the trip of a lifetime.

See another electrified Mini in NY:

It rides on tires “with emergency running characteristics” (likely run-flat) and has received an extra pair of headlights mounted on the grille for superior illumination. There’s also a roof rack holding a spare tire, which might come in handy during the vehicle’s adventure from North America to Tierra del Fuego after stopping by at the 2018 New York Auto Show.

The main idea behind the long-haul journey during which the car will cover a whopping 25,750 kilometers (16,000 miles) is to prove a plug-in hybrid powertrain is not just for short distances around town. The Panamericana a.k.a Interamericana, Ruta Panamericana or Pan-American Highway links the U.S. state of Alaska with the Argentinean Tierra del Fuego and it actually has a total length of 48,000 km (29,825 miles) if we include all of the alternative routes.

It won’t be covering the entire distance on four wheels as the Countryman Panamericana Plug-in Hybrid will have to hop on a ship in the border area between Panama and Colombia. During its fascinating trip, the partially electrified Mini will have to tackle everything from high mountain passes and dense jungles to gravel roads and great highways.

The car won’t go through any changes in the powertrain area and that means it will combine the same turbocharged 1.5-liter three-cylinder gasoline engine with an electric motor. The combustion engine is good for 134 horsepower and 162 pound-feet (220 Newton-meters) of torque whereas the electric motor is rated at 87 hp and 122 lb-ft (165 Nm). That gives the hybridized Mini a combined output of 221 hp and 284 lb-ft (385 Nm), good for a sprint to 60 mph (96 kph) in 6.8 seconds. With the battery fully charged, the Countryman will cover up to 24 miles (40 kilometers) running solely on electric juice.

Those interested in keeping a close eye on the extended journey will have to check out Mini’s Instagram page.

An exclusive version of the MINI Cooper S E Countryman ALL4 kicks off a long-haul journey from North America to Tierra del Fuego, unveiled at the 2018 New York International Auto Show.

Munich / New York. At the New York International Auto Show (March 30 through April 8, 2018), MINI-style electro mobility will conquer new terrain with the presentation of an exclusive model specially designed for extremely challenging routes. With its underpinnings taken from the brands first plug-in hybrid vehicle, the MINI Countryman Panamericana has been designed for a long-distance tour from North America to Tierra del Fuego, showcasing the power and durability of the brand’s largest model.

Additional headlights, tires with emergency running characteristics and a roof rack for transporting a spare wheel will make the compact five-door fit for a road trip in a class of its own. Based on the MINI Cooper SE Countryman ALL4 (fuel consumption combined: 2.3 - 2.1 l / 100 km, combined power consumption: 14.0 - 13.2 kWh / 100 km, combined CO2 emissions from fuel: 52 - 49 g / km), the combined power and versatility of its two engines make it the perfect endurance athlete for the Panamericana adventure.

Three MINI Countryman Panamericana Plug-In Hybrid vehicles will tackle the intercontinental route on the world's longest north-south road link. They will demonstrate the reliability and long-distance performance of the Plug-In Hybrid drive technology used in the MINI Cooper S Countryman ALL4.

The Plug-In Hybrid drive of the MINI Cooper SE Countryman ALL4 is an effective contribution to reducing CO2 emissions in road traffic, even beyond urban environments. With a range of up to 40 kilometers, it can reach beyond the city limits and remain fully electric on longer routes. The intelligently coordinated interaction of the electric drive with the combustion engine combines the possibility of local emission-free driving with the freedom of a long range offered by a conventionally powered vehicle.

The Panamericana, also known as Pan-American Highway, Ruta Panamericana or Interamericana depending on the region and language, connects the US state of Alaska with the Argentinean Tierra del Fuego and runs between the northernmost and the southernmost point over a distance of about 25,750 kilometers. In both North and South America, numerous intersections and alternative routes are part of the Panamericana road network, covering a total length of more than 48,000 kilometers. In the border area between Panama and Colombia, a ship passage is necessary to continue the journey, as an originally planned section of about 90 kilometers in length, inter alia, to protect the local rainforest area was not completed. The drive over the historic dream road leads through diverse climatic zones, dense jungle and challenging high mountain passes. In addition to well-developed highways, gravel roads and narrow mountain passages are part of the route network that the three MINI Countryman Panamericana Plug-In Hybrids will have to cope with.

The MINI Cooper S Countryman ALL4 offers five full-size seats, generous luggage space and numerous comfort features, ensuring an enjoyable drive whatever the terrain. Its two engines generate a combined system output of 165 kW / 224 hp. The precise control of the interaction between the front and rear wheels with the electric motor also ensures intelligent all-wheel drive. From rainy roads to sandy surfaces, gravel tracks or snow-covered mountain passages, the MINI Countryman Panamericana Plug-In Hybrid will tackle them all. Coverage from the journey will be available through the MINI News Instagram Channel at: www.instagram.com/mini.news