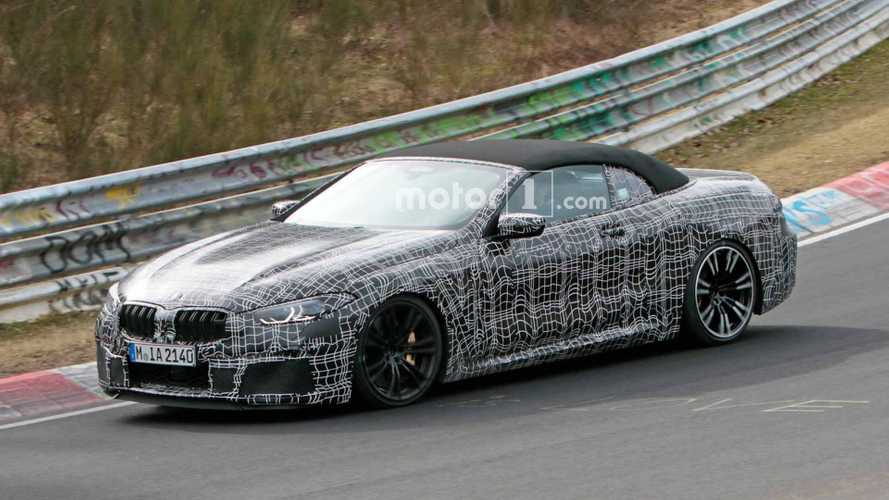 The M8 droptop looks ready to carry passengers in luxury and at high speeds.

The new 8 Series will spawn a whole range of models for BMW. In addition to sporty grand tourer, the model will eventually be available as a four-door Gran Coupe and the droptop variant in these photos. Buyers will also be able to get the vehicle in a high-performance M version. The latest pictures show the convertible doing some work around the Nürburgring, and it looks great even with the top up.

BMW keeps the camouflage simple on this M8 convertible, and the concealment's random pattern doesn't do much to hide the vehicle's design. Until your eye reaches the roof, the droptop looks identical to the coupe. Thin headlights with angular LEDs look mean, and the bent slats in the kidney grilles provides a visual flourish to the nose. The convertible top largely retains the hardtop's arching roofline, but it can't incorporate into the tail quite as cleanly because there needs to be room for folding the roof into the back. Folding the top down should result in quite a sleek grand tourer.

Inside, leaked photos suggest that the 8 Series should offer occupants quite a high-tech cabin. The driver gets a digital instrument panel, and a large infotainment screen dominates the top of the center stack. High-end trim like metal and gloss black pieces should make a good impression when entering the vehicle.

The M8's powertrain will reportedly derive from the M5. A 4.4-liter biturbo V8 will pump out at least 600 horsepower (447 kilowatts) and likely somewhat closer to 630 hp (470 kW). An eight-speed automatic would handle sending the power to a rear-biased all-wheel-drive system. As these photos show, large-diameter brake discs and big calipers would be part of the performance upgrades, too.

The M8 coupe will arrive before the end of the year, but the convertible possibly won't debut until 2019.